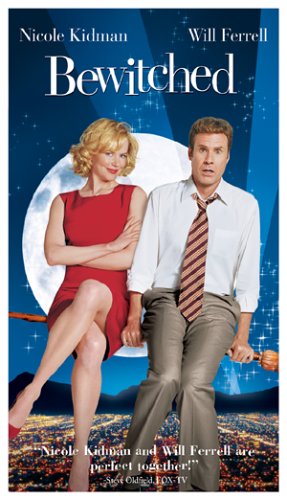 We weren't allowed to watch Bewitched while growing up. Daddy said it was racist.

The 2005 film adaptation of the series of the same name... sort of, written and directed by Nora Ephron. It stars Will Ferrell as Jack Wyatt, an egocentric actor whose last few films have been flops. Jack is looking for a role with which to make a comeback before his career does a complete nosedive. What he and his agent Ritchie (Jason Schwartzman) decide on is a new version of the classic Sitcom Bewitched re-conceived as a starring vehicle for Jack, in which he will play Darrin.

Meanwhile, Isabel Bigelow (Nicole Kidman) has moved to L.A. to demonstrate to both herself and her family that she is a modern, independent woman capable of living on her own. Unlike most young women who do so, though, Isabel is a genuine witch in the same mold as Samantha, and is determined to prove that she can live without magic, just like the mortals do. She's not quite good at it, nor at the mortal world in general, but she gets some help from her new next-door neighbor and best friend Maria.

Naturally, Jack -- who is looking for an unknown to play Samantha, the better to spotlight himself on the show -- stumbles across Isabel as she twitches her nose in a conveniently familiar way. He convinces her to audition for the role, and she gets it. But once it becomes clear that she's little more than a piece of stage dressing on The Jack Wyatt Show, she decides to make a few changes.

And as magic swirls around herself, Jack, and the brand-new version of Bewitched, characters from the show begin to come to life, offering their own help and advice, for better and worse...

Tropes used in Bewitched (film) include:

Jack Wyatt: [takes a drink of something Uncle Arthur has just made in the blender] This tastes awful!
Uncle Arthur: I know. I just like to blend.