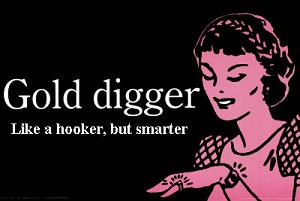 This is a character who hooks up with a partner, known as a Meal Ticket, specifically to mooch off of said partner's money and status in exchange of sex and valorization. In other words, she's a stay-at-home wife who is okay with her husband being the breadwinner but she doesn't run the household, doesn't do the chores, doesn't cook, doesn't pursue education, doesn't look after the kids and usually has no intention of having any. She mostly loves socializing, throwing lavish parties and shopping.

We use "she" because the digger is usually female in modern shows, but not always, and often MUCH more attractive than her partner. Often Distracted by the Luxury quite easily. Generally stunningly beautiful, to explain her success. Often a blonde whose hair is dyed. The Gold Digger who is deluding herself about her looks is a rarity.

Many a Gold Digger would be happy to marry a man who is old or in bad health, just so long as he'd be so kind as to leave at least some of his inheritance to his spouse when he dies; if she's a Black Widow that could happen much sooner than expected.

A common subversion is to have her turn out to be a Hooker with a Heart of Gold after all. Another way that works play with this is to have a rich man pretending to be poor, so as to ensure that any woman he becomes involved with loves him for himself and not his money. Yet another way to play with it is to have her genuinely fall in love with her meal ticket

In historical eras, male "fortune hunters" were much more common, owing to the bride's lack of say in the matter.

This is Older Than Steam. Compare Rich Suitor, Poor Suitor. Sometimes overlaps with Coattail-Riding Relative. For the opposite type of character, who definitely does not want the rich beau's money, see Not with Them for the Money. Contrast Marry for Love.

The idea that all women are gold diggers is the Distaff Counterpart to the idea that All Men Are Perverts.

Not to be confused with Goldfinger...though it would surprise nobody if Goldfinger was a gold digger at one point.

Examples of Gold Digger include:

Retrieved from "https://allthetropes.org/w/index.php?title=Gold_Digger&oldid=1926234"
Categories:
Cookies help us deliver our services. By using our services, you agree to our use of cookies.