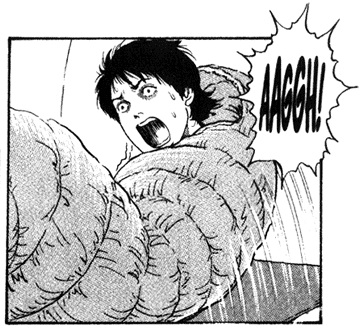 My sleeping bag is trying to eat me!

"Bart, it's time to end this dream / And don't forget the standard scream!"

—Sherri and Terri, The Simpsons

Whenever a character awakes from a nightmare on screen, he will fling himself up from lying down, while panting and looking around confused. Think carefully: how many times do you remember waking up from a nightmare by flinging your torso off the bed? Probably never, right? When most people wake up from one, they lie stunned and confused for a few seconds getting reoriented before looking around. The most you might get is a gasp and a full-body twitch. But that would be boring on screen, so anyone with a bad dream has to halfway fling himself out of bed to show the audience it is a dream. Used particularly during an All Just a Dream sequence, to emphasize that the previous scene didn't happen. Besides, it's just cool.

This does happen occasionally in the real world, but usually when one is startled by an outside sensation, not a nightmare. Most of the time, certain chemicals secreted while falling asleep prevent the sleeper from acting out their dreams, a condition known as sleep paralysis when it extends to shortly before falling asleep or after waking up. The rare times it does happen in real life involve a neurological disorder where the person is woken up from the dream by the sensation (not the other way around) and often describe the feeling as being "pushed" upright. Nevertheless, the Catapult Nightmare happens every single time on TV. If it's a Dream Within a Dream, expect two.

A night terror can have this effect, but it doesn't involve waking up and doesn't involve a dream—just full-on activation of the fight-or-flight system in the middle of the deepest stages of sleep. People who have them usually don't remember it in the morning.

Note: This trope may be somewhat justified if the "nightmare" the hero wakes up from was actually caused by a Phlebotinum-wielding villain. (After all, dark magic or a piece of advanced alien technology could conceivably cause a human brain and body to react in a way that's different from how they would normally.)

All that being said, however, one must admit that simply cutting to an extreme closeup of a character's eyes opening isn't quite as dramatic a way of portraying sudden awakening from a dream.

Can sometimes be Truth in Television: sleep paralysis prevents most of us from acting out our actions in our sleep, but there are exceptions. See also Instant Waking Skills.

Examples of Catapult Nightmare include:

...the worst dreams that ever I have are when I hear the surf booming about its coasts or start upright in bed with the sharp voice of [John Silver's parrot] Captain Flint still ringing in my ears: "Pieces of eight! Pieces of eight!"

Crow (as Rowsdower): AHHH! I forgot the liquor stores close at 8!

Sokka: (woken up as a result of Aang doing this in "The Storm") "What happened? Did we get captured again?"