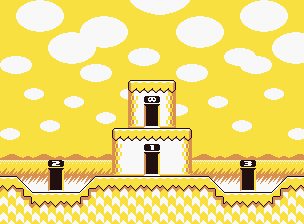 Each one of these doors leads to a level, and this is just one of the many hub worlds in this game.

In the beginning, levels were their own separate entities, completely disconnected from one another—beat one, and you go straight to the next, no intervening events or backtracking. Later, games added the idea of a "World Map" that connected the areas: you could now travel between worlds at will, perhaps unlocking shortcuts or alternate routes—but the map was a bland, uninteresting area in and of itself, existing only to carry you from one location to the next.

This concept was fleshed out and improved with the invention of the Hub Level, in which the space between the levels became a sort of pseudolevel in and of itself, using the same engine as the rest of the game, with geography and secrets of its own. The Hub Level is usually larger than the other levels but lacks the dangers, detail, and unique features that characterize the more specialized areas. It is still essentially a gateway area, but more developed. In many cases, you'll find individual rooms which contain the entrances to each level, with the scenery in the room being similar to that of the level itself, as sort of a preview of what the level will be like.

A common tack when using this trope is that the Hub Level is the area where the plot is really happening—the stages are "side areas" of sorts. The characters only need to go into the levels in order to collect the Plot Coupons necessary to proceed further into the Hub Level, where the Big Bad usually awaits. Events that take place in the stages usually have no effect on the Hub Level.

This is most frequently used in Platformers. RPGs usually stick to the classic World Map device, or use the Global Airship to fill the same function. Adventure Games usually don't make use of distinct, separate stages.

If you have to spend a lot of time Talking To Everyone in the Hub Level just to unlock the next stage, then you're looking at Fake Longevity.

Playable Menu is this trope taken to the next (ahem) level.

Not to be confused with Boston, or the cable channel.

Examples of Hub Level include:

Retrieved from "https://allthetropes.org/w/index.php?title=Hub_Level&oldid=1676384"
Categories:
Cookies help us deliver our services. By using our services, you agree to our use of cookies.