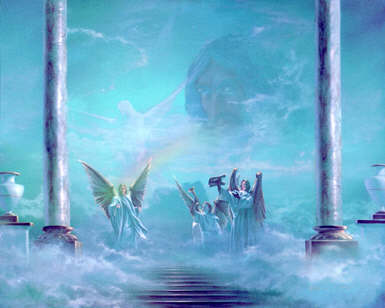 Fluffy Cloud Heaven is taking millennia of belief and art on "Heaven", and boiling it down to a Hallmark card. Don't expect to find this description in any religious text. Nowadays the use of this depiction is usually meant as satire. The exceptions almost invariably treat the depiction as a simple visual short-hand.

Heaven takes place in the clouds, which are solid enough to walk on. Humans become angels after they die. They are given wings, a long white robe, a lyre/harp and a Holy Halo that is literally a golden glowing ring that floats over their heads. Smaller Super-Deformed cherubs à la Cupid may float around too. Other than that, it's not exactly clear what people do. If God exists in Fluffy Cloud Heaven at all, he's a giant white-haired, bearded man wandering around or sitting on a huge white marble throne. There is often a line in front of the "Pearly Gates" of people wanting to get in, with an angel based on St. Peter who acts as a bouncer. He'll read his book about all the naughty and nice things someone has done, and then either let them in or send them to Hell via a Trap Door. Often he has a desk right in front of the gates. Sometimes there's even a computer on it.

Fluffy Cloud Heaven may be the home of Hollywood angels, who are less like something out of any established religion and more like fairy godmothers and godfathers. Some only offer banal homilies to their clients; others provide supernatural aid, but none of them smite the unrighteous, old testament style.

See also Fire and Brimstone Hell. Not to be mistaken for Bubbly Clouds, which may be fluffy but is still very terrestrial. Characters who die in a story often Died Happily Ever After before coming here.

Examples of Fluffy Cloud Heaven include:

Retrieved from "https://allthetropes.org/w/index.php?title=Fluffy_Cloud_Heaven&oldid=1635084"
Categories:
Cookies help us deliver our services. By using our services, you agree to our use of cookies.