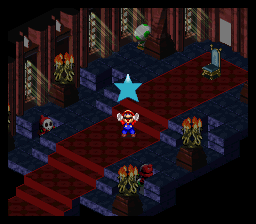 Super Mario RPG: Legend of the Seven Stars is Exactly What It Says on the Tin; It was the first Mario game to be a Role-Playing Game. It was developed by Nintendo and Square and released in 1996 for the SNES.

During a routine princess-saving by Mario, a giant sword with a face on the hilt crashes into Bowser's Keep, sending Mario, the Princess, and Bowser flying. Soon afterwards, a messenger from the stars named Geno (or rather, "Heart-1/8 Note-Exclamation Point-Question Mark") informs Mario that the sword also destroyed the Star Road, which grants the wishes of Mario's world. Unless the seven Star Pieces can be obtained and reassembled, no wishes will ever come true again. With the help of his companions (including, for the first time, Bowser), Mario sets off to smash the Smithy Gang and save the world.

The game was one of the first games to engage in a full-on frenzy of Lampshade Hanging regarding the tropes of the Mario series and RPGs. Nintendo would take this theme and run with it, producing a series of pseudo-sequels (Paper Mario, Mario & Luigi) without Square's involvement. (Nintendo and Square would finally work again, starting with Mario Hoops 3-on-3 on the Nintendo DS).

Due to licensing problems, very few of the characters that made their debut in this game have recurred in later Mario games, including fan-favorite Geno. But worry not! The game has appeared on the Wii's Virtual Console for all regions!

Tropes used in Super Mario RPG include:
Retrieved from "https://allthetropes.org/w/index.php?title=Super_Mario_RPG&oldid=1507620"
Categories:
Cookies help us deliver our services. By using our services, you agree to our use of cookies.