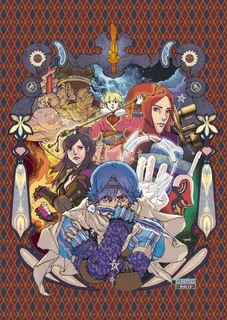 Cast light upon the darkened earth,
Save those lost in despair,
O Mighty Ocean,
Guide as we journey through
The darkest pit of night

The basic story? Thousands of years ago, an apocalyptic global war between man and gods took place. The men won, of course, and dismembered their fallen opponent. However, as a consequence of the terrible carnage and forbidden magics used in the conflict, the ocean dried up, the god-like Whale vanished, and the world was nearly consumed by poisonous miasma. A tribe of shaman-like magicians called the Children of the Earth managed to save humanity by using the body parts of the dead god to raise several continents into the sky, where they've remained ever since.

Flash forward a few millennia. A young Anti-Hero named Kalas is searching for the murderer of his grandfather and brother with the help of his "Guardian Spirit" (essentially a stand-in for the player himself, which allows the characters to break the fourth wall without breaking character) when he runs into a Mysterious Waif named Xelha, who's trying to stop the agents of the Alfard Empire from uncovering five "End Magnus", which, if gathered together, will allow the evil god destroyed so long ago to be resurrected. Seeing as how the current Emperor Geldoblame is not a nice man, this would be A Bad Thing (TM). Conveniently, the Emperor's men are the same guys who did the dirty deed to Kalas's family, so the two teens have an excuse to band together and hurt lots of people. Joining them are a buff fisherman named Gibari, an idealistic Alfard ambassador named Lyude, a cold-hearted mercenary named Savyna, and the bizarre, mysterious, and powerful Great Mizuti. Together, they sally forth to battle the forces of evil and whatnot. This is fairly typical stuff, as any fan of the genre knows.

So what makes the game interesting? Well, for starters, there's the visual appeal. The graphics remain among the best on the Gamecube, but it's more than that -- the game has a visual style which is very interesting. Unlike most media which have used the "floating continent" schtick, the world of Baten Kaitos is more than just a few chunks of otherwise-normal firmament suspended in the air. The architecture and costumes of the world offer unique "local flavor" without clear parallels in other worlds -- the land of Diadem, for example, has buildings made out of dark purple clouds which are very striking, and other towns and dungeons are similarly cool-looking. Furthermore, the characters have interesting designs, enhanced by their "Wings of the Heart", which appear during battle and some cutscenes. (It was implied in the first game that humans evolved wings out of necessity from living on islands floating in mid-air, but this was retconned in the prequel, where people are seen using them before the legendary war.) These aren't just stereotypical angel wings, either -- Xelha has wings like a fairy, Gibari uses the fins of a flying fish, and Savyna has peacock plumage. The wings change the way the characters move and fight, allowing for unique and flashy special attacks. And then there's the soundtracks of both games, which are often collectively considered Motoi Sakuraba's finest work.

The gameplay is also worth noting. In the world of Baten Kaitos, cards called "Magnus" are all-important, as they can be used to store the "essences" of objects, or even intangible things like memories and exhaustion. They're used for both battle (where the player draws them from a deck and plays them for attack, defense, and healing) and puzzle-solving (where the player uses them to transport vital materials). They even age over real time, with food rotting, plants growing, and coins increasing in value.

The game was followed up with a prequel -- Baten Kaitos Origins -- two years later. This game takes place twenty years before the first and stars a young Alfard soldier named Sagi, his magical puppet sidekick Guillo, and the daughter of an Alfard nobleman, Milliarde (or Milly). The game is far superior to the first in almost every respect -- navigation through the world is quicker and easier, the battle system has been simplified and sped up without losing its complexity or strategic elements, the voice acting is vastly improved, and the story expands upon the original exponentially. With all these improvements, the fact that it retconned away quite a few of the plot points from the first game can probably be forgiven. Sadly, the game was released four months before the Wii came out (being the final original game for the system outside of Japan), so it received almost no press or consumer attention either in Japan or the West.

Over the years, both the games have gotten some recognition as excellent RPGs for a system that didn't have too many. Dig up a used copy and your gaming dollars will be well spent.

But for the love of God, remember to turn off the voices on the first one. Talk about phoning it in. [1] If you do want to hear the voices (Rockin' Narm Charm!) make sure to set the audio settings to surround sound, otherwise everybody will sound like they're talking through a cardboard tube (which was supposed to simulate the feeling that you're really listening in from another world, but ended up sounding like poor audio quality).

Now with a character sheet!

A third installment for the Nintendo DS appeared on a list of games in production, but it never got past the early stages of production and was officially canceled. Sadly, the future of the series looked bleak until June 2011, when Monolith Soft placed a picture on their website as a teaser for a new project. Due to being attributed to Baten Kaitos co-designer Yasuyuki Honne and bearing a striking resemblance to Diadem particularly with the events of the first game's ending as well as rumors circulating about Monolith's upcoming 3DS and Wii U titles, fans have taken it as a sign of the long-awaited third game and are eagerly awaiting official confirmation.

Tropes used in Baten Kaitos include:

Sagi: Go to hell, you son of a bitch! You hurt my mother!

Kalas: It's me. I worked together with Melodia.