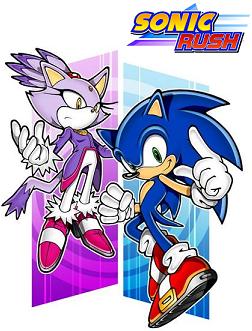 The Sonic Rush series is a pair of games in Sega's Sonic the Hedgehog franchise released for the Nintendo DS: Sonic Rush (2005) and Sonic Rush Adventure (2007). Both games are similar to the Sonic Advance Trilogy in that they are reminiscent of the classic side-scrollers for the Mega Drive/Genesis.

A gameplay feature introduced in this pair of games is the Sonic Boost; while holding down the X or Y buttons, your character will gain a boost of speed as long as the tension meter is not empty; the meter can be filled up by destroying enemies and performing tricks.

Like the Advance trilogy, the two games received a solid reception despite the Unpleasable Fanbase. Sega have all but admitted that the DS version of Sonic Colors (2010) can be considered an unofficial third installment in the series.

Tropes used in Sonic Rush Series include:
Retrieved from "https://allthetropes.org/w/index.php?title=Sonic_Rush_Series&oldid=1968101"
Categories:
Cookies help us deliver our services. By using our services, you agree to our use of cookies.