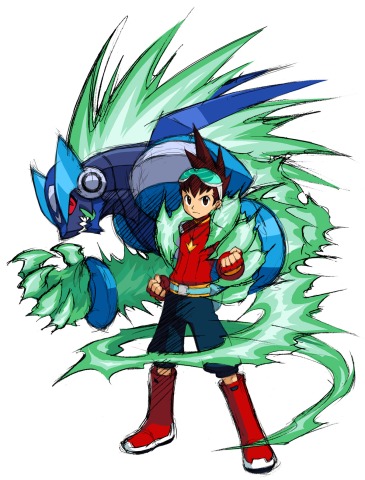 Geo Stelar, On The Air!

Taking place years after the events of Battle Network, it stars a young boy named Geo Stelar (Subaru Hoshikawa in the original Japanese), who lost his father after a journey to space. Before he disappeared, Geo's dad left him a device called a Visualizer, which allows him to see electromagnetic waves. He meets a blue alien named Omega-Xis (War-rock in the original Japanese), who is on the run from Planet FM, with other rogue aliens hot on his tail. While his power is weak on Earth, Omega states that he needs to fuse with a human in order to unlock his full power. Geo reluctantly agrees, and is thrown into a battle against the other FM-ians for the fate of the galaxy.

In Mega Man Star Force 2, Geo and Omega encounter Lady Vega and her compatriots, who are obsessed with finding the lost contintent of Mu. Vega and her assistant Solo are seeking the keys to Mu, the OOParts via the use of UMAs - Unidentified Mysterious Animals - wave-based lifeforms like FMians that take the shape of cryptozoological creatures.

In Mega Man Star Force 3, Geo and Omega must stop Meteor G, a sentient asteroid, from destroying the Earth, while contending with the spread of Noise caused by it. In addition, a group known as Dealer, led by the public philanthropist Mr. King, seeks to use it for their own nefarious ends (basically the final premise of Battle Network 4, but without all the tournaments... and better use of the asteroid in question).

An anime adaptation of the series also aired but ended with an abrupt finale of the second season, Ryusei no Rockman Tribe, based on the second game. The English dub first premiered on Cartoon Network's now-defunct Toonami block before moving online to Toonami Jetstream. Only half of the first season was released. No DVDs ever circulated in the United States or Japan.

Finally, the series had a small Crossover with the Mega Man Battle Network series in the form of an Updated Rerelease of the first Battle Network game with a crossover scenario added.

Despite being the sequel series to one of the more popular Mega Man franchises, Star Force saw a quick decline in popularity after its creation, and is often singled out for abuse by fans for ruining the Mega Man franchise. One way or the other, the series saw declining sales, and seems to have had its storyline resolved in Star Force 3 -- the only Mega Man franchise besides Zero and Battle Network to finish its plotline.