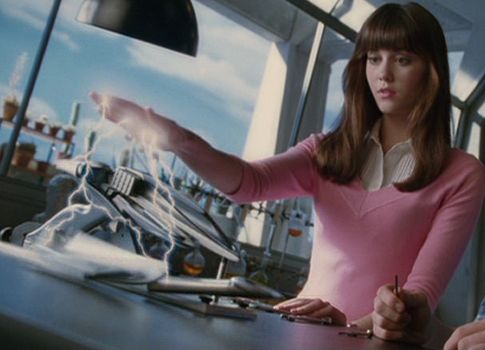 A "technopath" is someone who can control machines and bend them to the user's will, either through a physical or mental interface link. In some cases, this power also allows them to "hear" what a machine is "thinking" and establish a direct line of communication with the machine.

It's not rare to see technopaths bringing formerly inanimate objects to life (i.e., toasters moving around and firing Projectile Toast at disgruntled users), which is much easier to do if Everything Is Online.

Closely related to Magic From Technology. Not to be confused with a character who's pathologically bad with technology, or made a psycho/sociopath by technology.

In modern-day settings that have many people with superpowers walking around, this is frequently the power given to children, as a magical metaphor for the way that people who grew up around technology are generally more comfortable with it.

Compare with Walking Techfix, which is usually not deliberate. Contrast with Machine Empathy, where a character is closely attuned to a machine's behavior simply due to prolonged experience, and Techno Wizard for people capable of only metaphorical wizardry. Not to be confused with Walking Techbane, which is when a person is destructive to technology just by being near it.

Examples of Technopath include:

Retrieved from "https://allthetropes.org/w/index.php?title=Technopath&oldid=1757543"
Categories:
Cookies help us deliver our services. By using our services, you agree to our use of cookies.