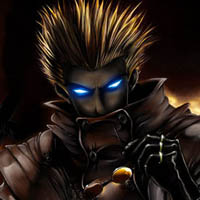 Whether a permanent indication of malevolence, the emergence of the Super-Powered Evil Side or perhaps the result of a Berserk Button or Rant-Inducing Slight, these eyes are clearly not a good sign. Though they aren't necessarily the province of villains—particularly powerful heroes often manifest this trope when it's time for the gloves to come off. Unlike Red Eyes, Take Warning, this always means immediate trouble, and thus are near the top of the hierarchy of Uh-Oh Eyes.

Very good for giving the Death Glare. A Slasher Smile or other happily murderous expression doesn't hurt either.

You can usually tell the trouble is over when the eye lights go out.

Examples of Glowing Eyes of Doom include:

Retrieved from "https://allthetropes.org/w/index.php?title=Glowing_Eyes_of_Doom&oldid=1824405"
Categories:
Cookies help us deliver our services. By using our services, you agree to our use of cookies.