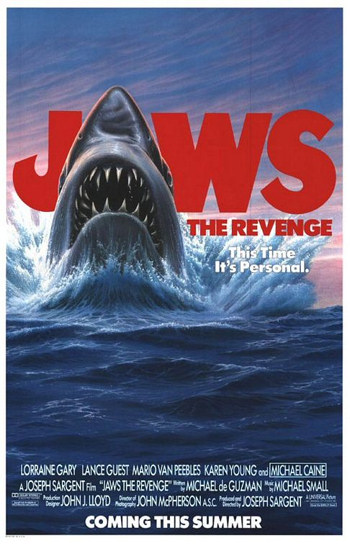 Nothing more personal than a shark on a vendetta!

The Stuffed Into the Fridge and Friendly Target tropes are invariably a setup for this.

Usually eventually leads to Not So Different. For a more specific form of this, see You Killed My Father. Often enough, This Means War. When done to their home or base, the hero will usually take a moment and Watch Troy Burn.

The Disposable Woman is a character who exists only to make It's Personal happen. When it gets personal, characters insist they must work alone.

One common variant is to order/trick allies aside to set up an one-on-one duel without interference. This can be risky but the avenger wouldn't risk anyone else getting hurt/someone stealing his precious right to do that particular kill himself!

If a character has this as his primary motivation rather than as part of another quest, then he's Not in This For Your Revolution.

Contrast when it's Nothing Personal, or at least they claim it's not.

Examples of It's Personal include:

Retrieved from "https://allthetropes.org/w/index.php?title=It%27s_Personal&oldid=1884429"
Categories:
Cookies help us deliver our services. By using our services, you agree to our use of cookies.