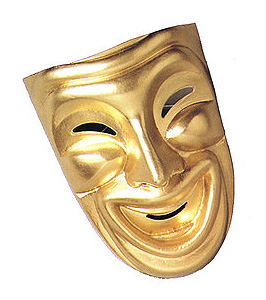 You don't want much, do you?

Comedy is an elusive and fast-moving target to define. There's an entire field for trying to discover "Humor Theory", trying to find out what makes funny tick. General public consensus is that humor comes from the unexpected, but this theory is still flawed and doesn't explain everything. One thing's for sure: comedy is funny.

Comedy, as something primarily happy, is directly opposed to Tragedy, but not so much Drama, and can never be perfectly combined with Horror. And has been since the day it was conceived as a term, albeit not like we know today; comedy was something with a happy ending, i.e. Dante's Divine Comedy, Tragedy was a something that had a sad ending. Propelled off of Rule of Funny, comedy infects all art forms. Its hobbies include satires, parodies, pastiches, playing for laughs, snarking, irony, and hiding snickerdoodles in its knickerbockers.

A really long list of influential comedians can be found at Names to Know in Comedy.

Examples of works in the Comedy genre include:

Retrieved from "https://allthetropes.org/w/index.php?title=Comedy&oldid=1778777"
Categories:
Cookies help us deliver our services. By using our services, you agree to our use of cookies.