Everything About Fiction You Never Wanted to Know.
Jump to navigation Jump to search
/wiki/Eddie Izzardcreator 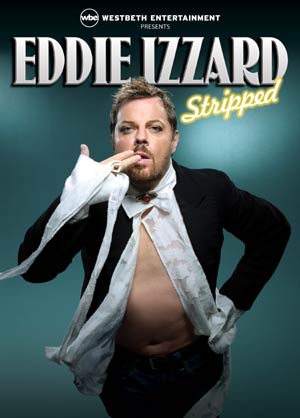 So, uh... yeah. So! Eddie Izzard! He's a British actor who does stand-up comedy. His stand-up style is rambling, free-associating monologues with pantomimic sketches, with Conversational Troping by the fistful should he veer onto the subjects of TV and cinema, which he will. He is known for being an Action! Transvestite (or if you prefer, Executive Transvestite). He uses That Other Wiki to do his research.

He's one of the few comedians who currently does Labour Party gigs. He is also a movie actor, with a minor tendency to play supervillains.[1]

On 27 July 2009, Izzard began a seven week mega-marathon run around the UK to raise money for Sport Relief. He ran six days a week for 51 days, covering at least 27 miles per day, carrying a flag for each county in which he ran, from London to Cardiff to Belfast to Edinburgh and back to London. He completed his 1,110 mile run on 15 September 2009 at Potters Bay and rescued a kitten along the way. Izzard was 47 years old at the time, and had completed his first marathon just three months before.

This man is so highly thought of as a comedian and performer that Thy Lord the Comedy God Himself, John Cleese, described him as the "Lost Python".

His sketches provide examples and/or discussions of:

Retrieved from "https://allthetropes.org/w/index.php?title=Eddie_Izzard&oldid=1861799"
Categories:
Cookies help us deliver our services. By using our services, you agree to our use of cookies.