Everything About Fiction You Never Wanted to Know.
Jump to navigation Jump to search
/wiki/P. G. Wodehousecreator 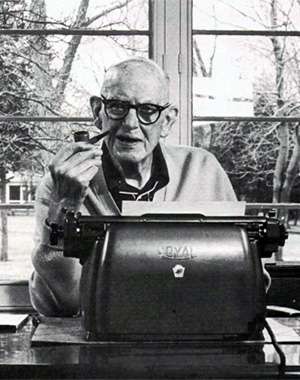 Ineffectual gentry, cunning servants, horrendous aunts -- all these were contributed to the Genteel Interbellum Setting by Pelham Grenville Wodehouse ("Plum" to friends -- and the last name is prounounced "Woodhouse," not "Woadhouse") (1881-1975), a prolific writer of light comedies, who was also responsible for many early Broadway musicals.

Beginning his career in the earliest years of the 20th century as a writer of topical verse for the newspapers, he first made a name as an author mainly of boys' school stories. Wodehouse soon moved into the more lucrative field of light romance, and finally, in the late Twenties, settled on the pure comedies he preferred, and which he continued writing up to his last book (published posthumously as Sunset at Blandings). He additionally wrote the book to several long-running Broadway musicals, adapted some others to the stage, and rewrote Cole Porter's Anything Goes.

After Wodehouse had been captured and released again by German forces in France, it was erroneously reported in the UK that he had broadcast enemy propaganda (he actually wrote radio broadcasts that supported the Allies). He was denounced as a traitor, and went into self-imposed exile on Long Island, NY, never to return to his native England, even to receive the knighthood that was granted him by Queen Elizabeth II in 1975. He died the same year at the age of 93.

Wodehouse's stories are generally tangles of zany schemes motivated by frustrated love. For example, say a young Mr. Reggie Worthington wants to be engaged to Betty Harte, but first must (a) disengage himself from Wilhelmina "Billie" Wreckham by pairing her up with Cyril "Bunny" Rabbington-Vole; (b) match Cyril's jealous fiancée, Edith Pilsworth, with Billie's equally green-eyed brother Freddie, who has been trying to keep all men away from his sister, and (c) blackmail Aunt Geraldine into allowing the engagements by holding hostage her prized 17th Century silver MacGuffin. Naturally, Betty, Billie, Cyril, Edith and Freddie all have devised their own zany schemes, each flawlessly assured to land our Reggie example in the soup. Mistaken identities, misinterpretations of events, secrets, blackmail, theft, ludicrous bets, accidental engagements, and, of course, True Love also contribute. A typical Wodehouse novel, as nonsensical and as breezy as it strives to be, is actually very tightly plotted, with many examples of Chekhov's Gun and all its related tropes.

Although Wodehouse penned several overlapping series, among them the "Oldest Member" golf stories, Mr. Mulliner's tall tales, the ongoing adventures of Psmith, and the ever-hopeful scheming of Stanley Ukridge, today he is best remembered for two -- Jeeves and Wooster and Blandings Castle:

Wodehouse's most famous Upper Class Twit, Bertram Wilberforce "Bertie" Wooster, is the character who probably best embodies Wodehouse's gift for language. Bertie expresses himself with a loopy eloquence, giving this series its much-beloved Cloudcuckoolander sense of humor. His Servile Snarker valet (not butler), Reginald Jeeves, is as capable as Bertie is ineffectual. With, apparently, the same effort most people put into buttoning their cuffs, Jeeves rescues Bertie and/or his friends from their entanglements and restores the status quo.

Blandings, meanwhile, a castle which "has impostors the way other places have mice", is the home of the elderly and ineffectual Earl of Emsworth, which is routinely used by his many domineering sisters to imprison nieces or nephews intent on an unsuitable marriage. The would-be fiance has to infiltrate the castle in disguise, often with help from the Earl's ne'er-do-well brother Galahad Threepwood, and capable, sporting butler Sebastian Beach (who actually is a butler), or less often his good friend Frederick Altamont Cornwallis Twistleton, Earl of Ickenham, who aims always to spread sweetness and light, and persuade Emsworth to overrule his sister.

Wodehouse's books have been the basis for a number of films and television series. The Blandings series has seen Clive Currie and Horace Hodges as Lord Emsworth in movie versions, and Fritz Schultz (in German), Sir Ralph Richardson, and Peter O'Toole on television, although many regard the BBC radio Lord Emsworth, Richard Vernon (who also lent his voice to Slartibartfast), as definitive. Arthur Treacher was well-known as the embodiment of Jeeves in the 1930s, with David Niven (!) taking the part of Bertie Wooster; in the Sixties, Ian Carmichael (also known for playing Lord Peter Wimsey and the BBC radio Galahad Threepwood) as Bertie and Dennis Price as Jeeves. (It is on record that Wodehouse did not care much for any of these adaptations.) Wodehouse himself appeared in the last year of his life to introduce episodes of the well-regarded BBC Wodehouse Playhouse, which brilliantly adapted many of the Mulliner and the Golf stories.

The Jeeves stories were also the basis and inspiration for an Andrew Lloyd Webber musical, Jeeves, which was released in 1975 and failed so spectacularly both critically and commercially that it's still thought of as Webber's only real flop. However, in 1996 the musical was reworked, rewritten and re-released as By Jeeves, which was far more successful and got generally positive reviews.

Most recently, and perhaps most famously, the Jeeves stories formed the basis of the popular early '90s series Jeeves and Wooster, starring Stephen Fry and Hugh Laurie, respectively.

In 2008, a josei manga adaptation of the Jeeves novels, called Please, Jeeves and drawn by Bun Katsuta, began serialization in Hana to Yume's Melody.

Works by P. G. Wodehouse with their own trope pages include:
P. G. Wodehouse provides examples of the following tropes:
Retrieved from "https://allthetropes.org/w/index.php?title=P._G._Wodehouse&oldid=1544318"
Categories:
Cookies help us deliver our services. By using our services, you agree to our use of cookies.