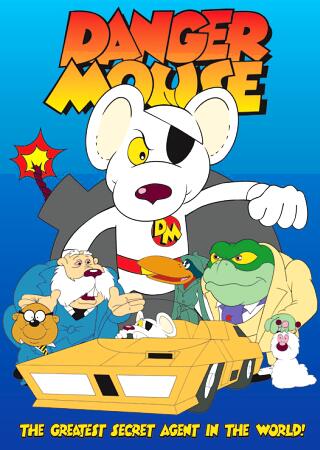 British animated series by Cosgrove Hall, running on ITV from 1981 to 1992, starring (now Sir) David Jason as the voice of Danger Mouse, a mouse who is the world's greatest secret agent. Accompanied by his somewhat more timid (and bumbling) partner, Penfold, Danger Mouse saves the world each week from a variety of menaces ranging from fiends and monsters to their own narrator. Although an entertaining and original series in its own right, Danger Mouse actually began as a parody of Danger Man (which is better known in the United States as Secret Agent, and as the forerunner of The Prisoner).

Not to be confused with the music producer of the same name (aka Brian Burton). David Morgan-Mar of Irregular Webcomic has also taken Danger Mouse as a nickname.

Tropes used in Danger Mouse include:
Retrieved from "https://allthetropes.org/w/index.php?title=Danger_Mouse&oldid=1832745"
Categories: