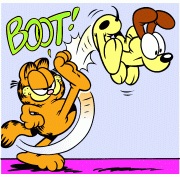 Cats get a bad rap.

While cat and dog owners can cite a truckload of quirks on both ends of the spectrum, when both species are featured in fiction, you are far more likely to find an outright cruel, nasty, and otherwise vicious cat character. Both sets of animals will have vices, but a dog is more likely to do them unintentionally. A cat enjoys causing trouble. Parts of this have to do with traditional traits that even cat lovers admire - independence and pride for some equals lack of love for the owners and aloofness for others. As a result, many writers who like cats, such as Terry Pratchett and Paul Gallico, play into the trope by presenting their pet as something of a Magnificent Bastard, expertly manipulating humans.

It certainly doesn't help considering highly marketable, small creatures are typically the kind of things cats see as prey. Dogs aren't exempt from this behavior in real life, but you'll rarely see them trying to actively catch anything on their own terms if they're not a hunting dog working for their master. Since mice (and birds) are often depicted as being intelligent, the express desire to eat them becomes a type of cannibalism and is therefore evil. Protagonist cats rarely eat mice (rats, maybe). Notably, the real threat that mice present, their ability to overpopulate, consume stores, and carry dangerous parasites, and the original reason we bred cats in the first place, is seldom mentioned in fiction. Nor is the fact that a whole category of dogs, terriers, also kill small, cute rodents.

Domestic dogs are rarely portrayed as evil unless the setting specifically only features dogs and antagonists are needed. A negative portrayal of dogs is usually light, treating them as simply dumb and servile (and fiercely territorial); the occasional evil tear-'em-to-pieces junkyard dog or Hell Hound is an exception. When they are genuinely annoying, this characteristic is given to stereotypical small yappy breeds that reflect their owners. In real life, it says more about a dog's training.

Much of this no doubt descends from Medieval European folklore associating cats with witches and other forces of evil. (At the same pyres witches were burned, cats were burned too.) At the same time, there is a grain of truth to this. "A deadly game of cat and mouse" is often a very real situation; cats not taught to hunt properly by their mothers often appear to clumsily toy with their prey before killing it, and even veteran mousers will play with their quarry before killing and consuming them, in order to avoid being bitten, since the saying is correct that "even a cornered mouse will snap at a cat" (but only when the mouse is aware of the cat; meanwhile, a cat that ambushes a mouse by surprise will kill it instantly, which is why cats are experts at hunting by stealth and secrecy). Cats are also among the few predators known to hunt and kill for fun, even when they're not going to eat the prey (though given that among the other animals known to do this are humans, we don't really have much room to give them grief).

It should also be noted that the overwhelming predominance of this trope in Western Animation is largely due to one simple fact that proves how astonishing the man's influence really was: Walt Disney was a dog person.

That said, it should come as no surprise that the Right-Hand-Cat is the Diabolical Mastermind's most popular pet of choice. Could also be the reason that All Witches Have Cats; an evil witch should have an mean Familiar.

Contrast Cute Kitten (though it can go hand-in-hand with this when Cute Is Evil), but, generally, Cuteness Equals Goodness, so this trope is mostly Played for Laughs with the evil being barely above Poke The Poodle level.

Compare Dogs Are Dumb and Killer Rabbit. Overlaps with Cats Are Superior, especially when Dumb Is Good. May also, in some cases, lead to Cats Are Snarkers. Not to be confused with CATS.

Examples of Cats Are Mean include:

Subversions, Inversions, and other Exceptions

Retrieved from "https://allthetropes.org/w/index.php?title=Cats_Are_Mean&oldid=1906478"
Categories:
Cookies help us deliver our services. By using our services, you agree to our use of cookies.