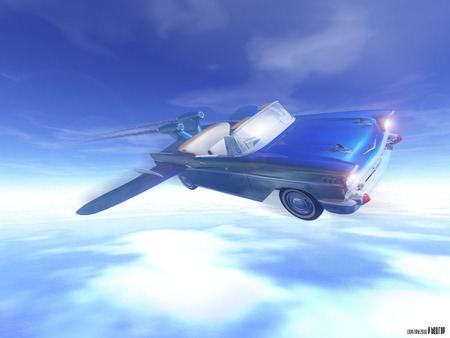 So your hero needs a Cool Car. But what do you do when missiles, Nitro Boost and ejector seats don't suffice to show just how much of a Badass he is? Simple: make it a flying car.

It's a quick way for writers to show just how super a Superhero is, particularly if they are a Badass Normal. Or sometimes it's just a lazy way to demonstrate a show is set in the future. Nothing screams "futuristic city-scape" better than giant buildings with all the space between them crammed with flying shiny specks! Either way, you need a flying car! Just ask Dante and Randall.

The lack of flying cars in Real Life is a common complaint. The fact that they would for all intents and purposes be personal aircraft, and require the same regulations and specialized skill as planes and helicopters is a big reason why we haven't seen any in our lifetimes. Several flying cars have been invented in Real Life, but the concept has always ended up getting scrapped because said flying cars used up a lot of fuel... and had a penchant for crash-landing when they ran out. Most fictional cars Hand Wave this by saying something about an Anti Gravity element in place.

Flying Bike is either a subtrope or a related trope, depending on how you view the relationship between cars and motorcycles in Real Life.

Examples of Flying Car include:

Retrieved from "https://allthetropes.org/w/index.php?title=Flying_Car&oldid=1790529"
Categories:
Cookies help us deliver our services. By using our services, you agree to our use of cookies.