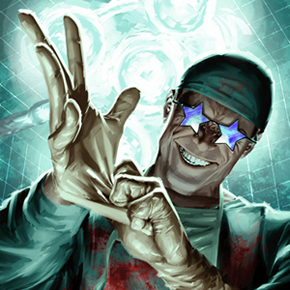 I don't believe that man's ever been to medical school!

Science created the atom bomb, it unleashes monsters, it angers the gods -- Science Is Bad. As a corollary to this, intelligence in media is often used for evil, or belongs to the Mad Scientist.

At least half of the characters in Comic Books whose names begin with "Doctor" are evil. Even the good Doctors are often weird, being prone to mad science, a blind pursuit of forbidden knowledge, or proving their critics wrong.

Actual practicing medical doctors are usually exempt from the evil evil title, probably because it's hard not to get behind a surgeon or doctor who actively works at saving people's lives, even if they're a jerk. Those who aren't in a Medical Drama tend to get less slack on this... In a nutshell, it's a mitigating factor, not an exception. (See "Mad Doctor")

Interestingly, it's actually possible to get a doctorate in the study of evil. The field is called Ponerology, although very few universities actually offer such a degree. May or may not be issued by Gannon University. Definitely issued by the Academy of Evil.

Compare Mad Scientist, which is often synonymous with this. See also Not That Kind of Doctor. Not to be confused with Morally-Ambiguous Ducktorate (though it's also related to evil). For an evil doctor whose field is dentistry or psychology, see Depraved Dentist or Psycho Psychologist, respectively.

Examples of Morally-Ambiguous Doctorate include:

Retrieved from "https://allthetropes.org/w/index.php?title=Morally-Ambiguous_Doctorate&oldid=1927242"
Categories:
Cookies help us deliver our services. By using our services, you agree to our use of cookies.