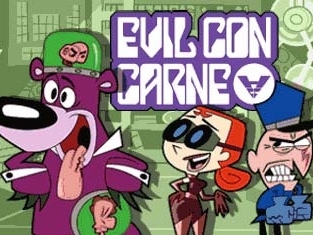 
To crush, and destroy... until it's all mine!
—Hector Con Carne

Evil Con Carne was a short-lived animated series created for Cartoon Network by Maxwell Atoms. It premiered in 2001 as one of the two cartoons that formed a part of the Three Shorts series Grim & Evil, the second one being The Grim Adventures of Billy and Mandy. After the split that gave each of these cartoons their own half-hour slots, however, Billy and Mandy went on to have many more seasons whereas Evil Con Carne was soon cancelled, even though it never lost its edge.

Set in an Alternate History where the League of Nations was never disbanded and peace and harmony is the norm among the countries of the world, the plot concerns the misdeeds of Villain Protagonist Hector Con Carne, a billionaire Hispanic arms smuggler reduced to Brain In a Jar status after an assassination attempt destroyed his mansion along with most of his body. Rescued by Major Doctor Ghastly, a perky female Mad Scientist who had fallen in love with him, and implanted into the body of a Russian circus bear named Boskov, Hector now reigns over an arch-criminal organization named Evil Con Carne, which combats the League of Nations' forces in a grandiose attempt to conquer the Earth. The cast also features the sadistic General Skarr, a competent military strategist and Hector's second-in-command, who constantly tries to kill Hector and seize ECC's reins for himself.

Ghastly: So what do you think? He's not too bad, is he?
Hector: That's just it! He's not bad at all!