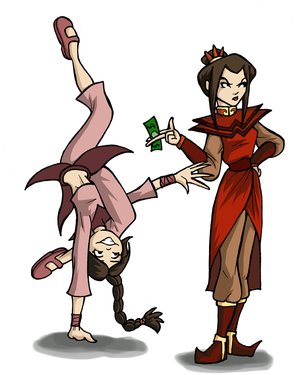 See, I told you I could do it!

A good way of applying the humor of The Comically Serious to villains is by pairing them with the Perky Female Minion. This character is something like the Distaff Counterpart/Foil to the Enigmatic Minion; they can range in psyche from Punch Clock Villain to fairly psychotic, but have an upbeat, Genki Girl personality in sharp contrast to the villain they serve who will be gloomy, Ax Crazy, etc. If the female minion has a crush on the other villain, it will generally be of the Mad Love variety, although this affection isn't a requirement.

However, despite her cheerfulness and energy, she is usually still good at what she does. When this is the case, her employer usually views her as a Bunny Ears Lawyer.

Examples of Perky Female Minion include:

Retrieved from "https://allthetropes.org/w/index.php?title=Perky_Female_Minion&oldid=1640431"
Categories:
Cookies help us deliver our services. By using our services, you agree to our use of cookies.