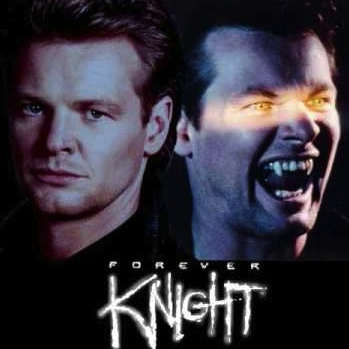 Care for a quick bite?

Airing from 1992 through 1996, this series examined the plight of Nicholas Knight, an 800 year old vampire who is determined to reclaim his humanity. In the meantime, he works as a police detective; he is assisted in both causes by coroner (and love interest) Natalie Lambert. His efforts are often mocked and sometimes thwarted by maker Lucien LaCroix and "Big Sister" and ex?lover Janette DuCharme.

Each story has a B plot, told in flashback usually relating thematically (But occasionally directly) to the main plot and usually taken from Nick's 800 years of backstory.

Bears no relation with the recurring antagonistic group from the Ben 10 franchise.

Tropes used in Forever Knight include:
Retrieved from "https://allthetropes.org/w/index.php?title=Forever_Knight&oldid=1134357"
Categories: