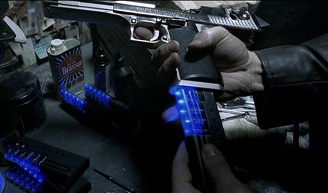 From vampire to Extra Crispy in twenty seconds.

Our weapons are useless! The enemy is Immune to Bullets! What can we mere humans do against the unending procession of impervious foes?

Quite a lot, apparently. By making modifications to our puny earth weapons (or, more commonly, to the ammunition) the world can be saved without having to Nuke'Em (which usually doesn't work anyway since 'nukes are bad').

Said modification usually include using the target's Weaksauce Weakness in the weapon, such as silver melted from crosses, UV ammunition, and Cold Iron. Expect the boss monster to be immune thanks to their Cross-Melting Aura.

A sub-trope, or rather a particular use, of Applied Phlebotinum. See also Abnormal Ammo, Armor-Piercing Attack, Kill It with Fire and Kill It with Ice.

Name based on depleted uranium ammunition used by various nations since the 1970s.

Examples of Depleted Phlebotinum Shells include:

Hard to work with, but great against vampires. There's even a certain basis in reality for this - garlic contains Allicin, a potent anti-biotic and anti-fungal agent. Remember that the original vampire myths described them as plague carriers instead of angsty nobility or teenage estrogen bait.

Weapons made from religious relics or containing pieces of such are often used against supernatural foes, often in combination with special materials.

Iron, often Cold Iron or meteoric iron, is a traditional ward and weapon against magic, especially The Fair Folk. The term "cold iron" comes down to us from folklore, apparently as a poetic form of words (much as "cold steel" was used in later times). In various fictions, the definition of cold iron varies greatly.

Kryptonite and other Green Rocks

If the enemy is an alien or monster with a very specific, non-mythological weakness, be it Kryptonite, Music, or Water.

When only magic can affect a monster, sometimes infusing magic into a more mundane weapon will do a better job.

Silver weapons, including Silver Bullets, are commonly used on Werewolves and (less frequently) Vampires, stemming back to the idea of silver being a pure metal and/or associated with the moon. (Note that in Real Life, silver and copper do have biocidal properties. The idiomatic "silver spoon", as well as the common brass doorknob, is very effective at killing bacteria on contact. Silver nitrate is one of the oldest disinfectants, and one of the few such remedies still commonly used.)

A common way to kill vamps, using UV rounds, grenades, lamps, or other tricks. The implication is that a number of supernatural creatures are susceptible to ionizing radiation (by definition, light capable of tanning skin is ionizing), which is often used to sterilize tools and food, tying into the concept of supernatural creatures as plague carriers. It also means that someone should perhaps attempt to kill vampires with X-ray machines or plain 'ol depleted uranium.

If the enemy, usually a vampire, is vulnerable to wood, the solution is to upgrade the stake into a wood tipped bullet or more powerful and faster reloading crossbow.

For weapons that combine various weaknesses into one shotgun shell, sword, or what have you. Just to cover all the bases.

If bullets won't kill it, then obviously the answer is to make better bullets. If they're just really well protected, use a harder material like bronze or tungsten. If somebody's playing tricks with magnets, use compressed plastic. With magnesium, you can Kill It with Fire! Or perhaps you can recycle their phlebotinum and Hoist Them By Their Own Petard.

Retrieved from "https://allthetropes.org/w/index.php?title=Depleted_Phlebotinum_Shells&oldid=1908649"
Categories:
Cookies help us deliver our services. By using our services, you agree to our use of cookies.