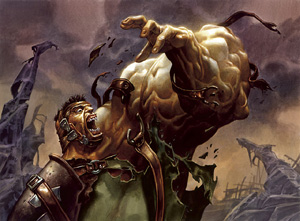 Side Effects may include...

Super Serum with some unpleasant side effects, most commonly insanity. The Psycho Serum could be the result of questionable government programs Gone Horribly Wrong or freak lab accidents; the user might be unaware of the side effects... or just doesn't care. Consequences include, but are by no means limited to:

Since the idea is that it makes one more likely to be victorious (usually in battle) despite the above, it's closely associated with the concept of Race To The Bottom.

This item is available in the Trope Co Catalog

Examples of Psycho Serum include:

Retrieved from "https://allthetropes.org/w/index.php?title=Psycho_Serum&oldid=1967581"
Categories:
Cookies help us deliver our services. By using our services, you agree to our use of cookies.