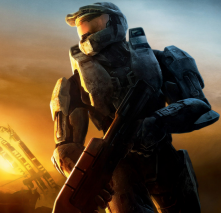 "They let me pick, did I ever tell you that? Choose whichever Spartan I wanted. You know me. I did my research. Watched as you became the soldier we needed you to be. Like the others, you were strong and swift and brave. A natural leader. But you had something they didn't. Something no one saw... but me. Can you guess? Luck. Was I wrong?"
—Cortana

Picking up directly from Halo 2, Master Chief returns to fight for Earth and discover the secrets of the Halo builders. This game earned $170 million in its first day, breaking all previous records (including Halo 2's).

The campaign was no longer split into two parts, instead having a single co-op campaign revolving around the Master Chief and the Arbiter working side by side. The story wrapped up the trilogy and shows the conclusion of the war.

The gameplay was kept largely intact and identical to the previous games, only refining the changes made in Halo 2. The only real new features are the weapon types (a complete subset of Brute weapons and two additional grenade types to the standard frag and plasma, spike and incendiary) and equipment you can deploy that changes the battle dynamics (impenetrable "bubble shield", trip mine, radar jammer, etc).

Tropes used in Halo 3 include:

Elite: "Brute ships, staggered line! Ship Master! They outnumber us three-to-one!"
R'Tas Vadum: "Then it is an even fight."

The Prophet of Truth: I AM TRUTH! The voice of the COVENANT!
Arbiter: And so, you must be silenced.

Elite: "Shipmaster, Brute Ships. Staggered Line. They outnumber us three to one!"
Half-Jaw: "Then it is an even fight."

Cortana: If we don't make it...
Master Chief: We'll make it.
Cortana: It's been an honor serving with you, John.

"Your destruction is the will of the gods! And I? I am their instrument!"

Prophet of Truth: I am Truth! The voice.... of the Covenant!
Arbiter: And so, you must be silenced.

343 Guilty Spark: UNACCEPTABLE! UNACCEPTABLE! ABSOLUTELY UNACCEPTABLE! Protocol dictates action! I see now that helping you was wrong! You are a child of my makers, inheritors of all they left behind. You are Forerunner, but this ring... is mine!