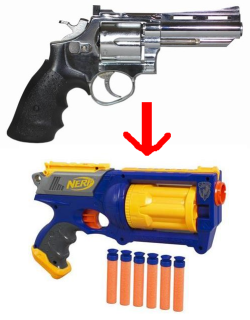 A change to a game that weakens a particular item, ability or tactic. It's usually done to fix something perceived as a Game Breaker, and is almost always a subject of controversy in gaming communities. Occasionally, it's not a change in one game, but rather a change in an equivalent item, ability, or tactic between one game and its sequel.

In the past, Nerfs for console games were all but impossible due to lacking the ability to patch them. Modern consoles however provide this ability, so they now join computer games in this. Many games, especially MMORPGs and other online multiplayer games, are constantly adjusted to maintain balance. Sometimes, that requires taking something powerful down a peg or two. Of course, users of that item will not be amused, and will inevitably flock to the forums to complain, resulting in a Flame War about whether or not the nerf was justified. On the other hand, rants from poor players that something should be nerfed are just as common. Either way, the subject is a touchy one.

A Buff is a change for the better. These are as controversial as Nerfs; a Buff to one unit's Hit Points is effectively a Nerf to the damage of anything attacking it. A Flame War can even develop on whether a given change is a Buff or a Nerf, much less an improvement in the game as a whole.

"Nerf" is the brand name of a group of toys made from squishy foam. "Nerf Guns" that fire projectiles of the stuff are most famous, but the trope actually gets its name from another part of the toy line, squishy foam bats.

These days, the term has been expanded so that "Nerf" is any downward adjustment, not just an unduly crippling one; similarly, the "Nerf Bat" is no longer what the player is issued to take on The Empire with, but what the developer whacks him with.

Has no relationship to "Narf" from Pinky and The Brain.

Examples of Nerf include:

The big exception to this trend was the final game, BN6, which was extremely generous -- some even found it too generous. (180 damage from an M-Cannon! Everything in * code!)

Retrieved from "https://allthetropes.org/w/index.php?title=Nerf&oldid=1835631"
Categories:
Cookies help us deliver our services. By using our services, you agree to our use of cookies.