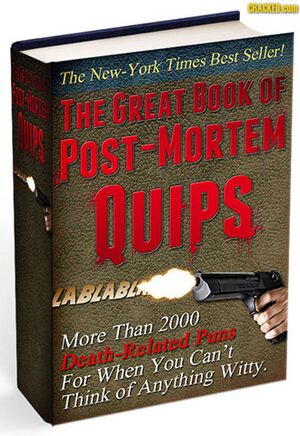 When the hero has just killed someone, often in a gruesome manner, they do a Bond One-Liner.

The classic Bond One-Liner is typically a bad pun or Obligatory Joke on the manner in which the victim was dispatched. It may be a sign that the character has sociopathic tendencies. Very much borders on Crosses the Line Twice; overusing can cause the speaker to cross the Moral Event Horizon.

The Trope Namer is James Bond, who does this in every single one of his films.[1] Ditto Arnold Schwarzenegger action movies, but Bond's have more pun.

Alternately, a Bond One-Liner can be a snarky response to the now-dead enemy's attempted Pre-Mortem One-Liner, or an Ironic Echo of something they said to the hero earlier.

Note that while William Peterson's one liners on CSI, David Caruso's one liners on the Miami sister show and Jerry Orbach's on Law and Order are often similar in content, they fail the test for this trope, as Grissom and Briscoe were never the killers, only snarkers. In general, see Quip to Black for cheesy one-liners right before a cut.

Also, when said before killing, it's a Pre-Mortem One-Liner (which, for the record, James Bond says just as often). If the character is making smartass quips about their own impending death then it's a Gallows Humour version of a Facing the Bullets One-Liner.

Retrieved from "https://allthetropes.org/w/index.php?title=Bond_One-Liner&oldid=1949292"
Categories:
Cookies help us deliver our services. By using our services, you agree to our use of cookies.