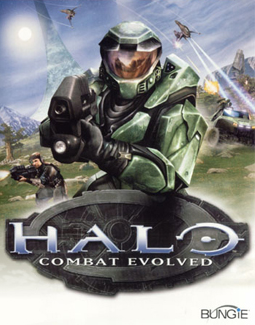 Halo: Combat Evolved (released on November 15, 2001) introduced the Halo series from relatively Humble Beginnings. Humanity has mostly been holding their ground against the Covenant for the last 25 years, and the game starts following a devastating defeat at a major Earth colony, Reach, and the crew of the warship the Pillar of Autumn. The game opens In Medias Res as the warship comes under attack, and is forced to make a crash landing on a mysterious ring-shaped Covenant-worshiped megastructure known as Halo.

The player controls the Master Chief, one of the last of a group of specially raised and trained cyborg Super Soldiers: the Spartans. He is taken out of stasis during the attack on the ship, and his mission is to protect the survivors, find out what Halo is and what the Covenant want with it. Master Chief is the quiet type, but the A.I. program "Cortana" linked into his battle suit does most of the talking and provides plenty of tech support. Together, they eventually uncover an ancient threat aboard the Halo which makes the Covenant look like a church picnic. The Halo itself has a much more malevolent purpose...

This First-Person Shooter was the big title used to launch the Xbox console. Its superior graphics, interesting story and engaging gameplay made it a hit with critics and gamers alike, and it was hugely influential in bringing the concept of LAN parties, which was later expanded upon with Halo 2 being the Killer App for online gaming for the Xbox. The seamless integration of vehicles, the very expansive levels and the constant rotation of weapon types gave it a unique experience.

A port to Windows and Mac OS was released several years later courtesy of Gearbox Software, which added native online multiplayer without tunneling utilities, the Fuel Rod Gun (strangely treated as an energy weapon) and Flamethrower weapons for multiplayer, as well as the Banshee and a new Warthog with a rocket turret as multiplayer vehicles along with the usual computer gaming features (enhanced graphics, mods, and so forth). The original release was not particularly designed for modification, however, and so they released a separate Halo: Custom Edition with some engine optimizations, exclusively used for multiplayer. It has its own separate download and installer, but requires a CD key from the retail version as well as having a CD check.

After many rumours of a remake for its tenth anniversary, Halo: Combat Evolved Anniversary was released on November 15, 2011. The intended goal of the remake is to update the graphics, but otherwise replicate the gameplay and story exactly: the campaign mode uses the original Halo engine for gameplay with a new, toggle-able graphics layer on top. The remake's multiplayer is run out of Halo: Reach, using a set of playlists that have been balanced to replicate the feel of Halo: Combat Evolved. The disc also comes with access to the Anniversary Map Pack, a new set of Halo Reach maps that includes fan favorites from Halo 2 and Halo PC in addition to most of the maps from Halo: Combat Evolved.