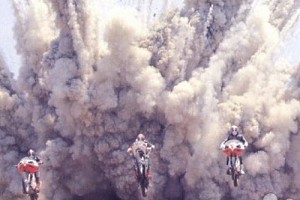 A Time Bomb, superweapon, crashed car, etc. is about to explode. The heroes run as fast as they can and try to leap behind shelter, just as it explodes. Often features a cool shot of the heroes diving towards the camera.

Virtually every action series has had its share of Outrun the Fireball moments. In fact, it is easy to imagine that some remote civilization studying Earth through its television transmissions might conclude that Earthlings running causes Stuff Blowing Up, not the other way around.

Can also be done with cars, airplanes, spaceships, snowmobiles, mine carts... anything that moves, or doesn't, for that matter.

There are also two related tropes to this. One is a type of Rocket Jump: an extremely hard-ass character may exploit the power of the blast as it propels them through the air to reach places they wouldn't normally have been able to. The second is combining this with Out of the Inferno: for a second it seems that the characters won't make it as the flames from the explosion reach and engulf them...Then a few second later they come out bursting through the flames, slightly parched but unharmed.

On rare occasion, the characters will be made to look like fools by there being no explosion after diving into the dust (toward the camera). This will be followed by a four-count beat, to share an embarrassed moment, which will be punctuated by an explosion.

The Badass Normal often showcases just how cool he is by always calmly walking away from the building or car, and perhaps casually putting on his Cool Shades or lighting up a cigarette just as the explosion goes off. Badass characters don't have to run unless it's darned important. Cool guys don't look at explosions.

Examined exhaustively at the website The Reality of Running Away from Stuff.

For when a character doesn't outrun the fireball and walks calmly out of and away from the fire anyway, see Out of the Inferno. See also Convection, Schmonvection. In Real Life, the accepted reaction to an approaching fireball is to either jump down a deep hole and pull it in after you, or bend over and kiss your ass goodbye. See also Bomb Disposal when this is done intentionally.

Contrast Riding Into the Sunset.

Examples of Outrun the Fireball include:

Retrieved from "https://allthetropes.org/w/index.php?title=Outrun_the_Fireball&oldid=1853687"
Categories:
Cookies help us deliver our services. By using our services, you agree to our use of cookies.