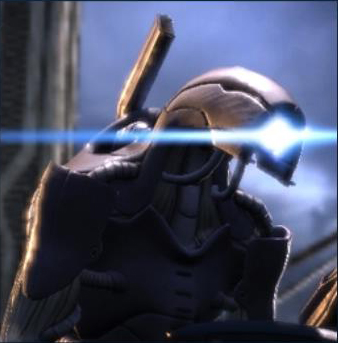 It seems that if you want to give a Killer Robot, Cyborg, or Humongous Mecha a really sinister look, you have to build it with just one eye.

Similar to the Uncanny Valley, by deliberately giving androids a characteristic that is not human, you're making the audience realize how creepily in-human they actually are. For more standard robots or Humongous Mecha, a single eye denotes a sinister asymmetry not found anywhere in nature (except the flounder). It doesn't help these eyes are lidless and usually glow a relentless red, creating the illusion of a singular and evil focus.

Examples of Cyber Cyclops include:

Retrieved from "https://allthetropes.org/w/index.php?title=Cyber_Cyclops&oldid=1870431"
Categories:
Cookies help us deliver our services. By using our services, you agree to our use of cookies.