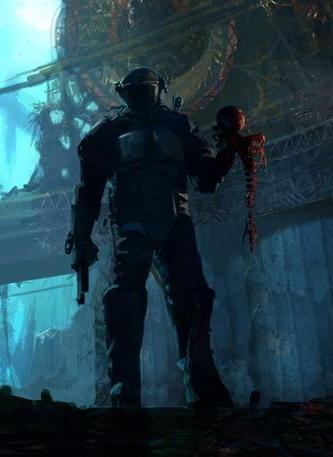 Somewhere in the heavens... They are waiting.

Marathon is a series of groundbreaking Science Fiction First Person Shooters developed for the Macintosh by Bungie Software. The game has a ridiculously in-depth story even compared to modern games, and its plot can get very complex and sometimes even headache-inducing. In the pseudo-random clues provided by in-game terminals, it comes close to William Gibson ambiguity: lots of surreal textual scenes (in the middle of convincing runtime errors) will scratch your cortex; plausible quotes from technology design documents, history records, and standards guidelines that make you wish no AIs will ever be put in working order.

The game is named after the colony ship upon which most of the first game takes place (and for the historical Battle of Marathon), they include:

In Marathon, set in July 2794, a hapless security officer returns from shore leave on the fledgling Tau Ceti IV colony below the titular spaceship, only to discover that he is going to have a very bad day at work. A massive alien spaceship has appeared out of thin vacuum and attacked everything in sight, breaking two of the ship's three resident AIs and generally making a giant mess. The security officer and the still-functioning AI Leela are dutifully fighting off the alien menace, when it turns out the AI Durandal didn't so much shut down as go completely crazy. And it seems he's got plans of his own… The gameplay in this game is mostly dark claustrophobic hallways and corridors, with a few open areas, but it's all inside of ships.

Seventeen years later, Marathon 2: Durandal, the simplest and shortest game in the trilogy to complete, drops the security officer into the middle of an interstellar war between Durandal and the Pfhor. It turns out Durandal kidnapped you and put you into stasis after the first game, and now he's sending you to explore ancient ruins on the S'pht homeworld of Lh'owon while he beats up a whole fleet of Pfhor ships. All in a day's work, right? This game is mostly wide-open outdoors. There is a lot of swimming to do.

Marathon Infinity: Blood Tides of Lh'owon returns to the Mind Screw attitude of the first game, and then some. In a parallel timeline where the second game's events never happened, the security officer is stranded on a claustrophobic space station haunted by Durandal's dying words about an Eldritch Abomination. And then he proceeds to… uh... Well, nobody's really quite sure what's going on in this one. It sure gets hard, though. This game has the Jjaro and Pfhor ship levels, which are similar to the first game's levels, and the levels on Lh'owon, naturally, being similar to those in the second. However, the levels in this game tend to be a lot bigger than those in either of its predecessors. Two of them approach the engine's limit for polygon count.

Note: These games are now freeware. Shortly before its acquisition by Microsoft, Bungie open-sourced M2's engine and five years later re-released all three games' assets for free download. (Infinity's source was finally released in 2011). Fans have upgraded the engine to support (optional) shiny graphics and lots of new features, and ported it to every major OS. You can grab the games and the Aleph One engine here and the various mods, enhancements and maps here.

Recently revealed court-documents relating to Bungie's contract with Activision implies that they may be working on prototyping a new Marathon game. As of yet, nothing has been announced and nothing is known, but the possibility is sure to have Fans Rejoicing.

Tropes used in Marathon Trilogy include:

Oddly, this is familiar to you, as if it were from an old dream, but you can't exactly remember...

Retrieved from "https://allthetropes.org/w/index.php?title=Marathon_Trilogy&oldid=1872162"
Categories:
Cookies help us deliver our services. By using our services, you agree to our use of cookies.