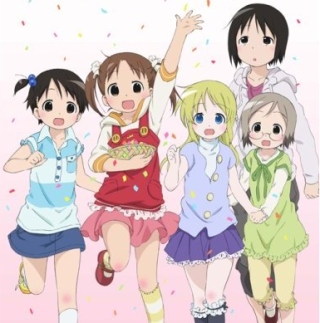 Depicting the everyday life of four pre-adolescent girls and their older sister figure, Ichigo Mashimaro (Strawberry Marshmallow) doesn't have excessive drama, or supernatural events, or giant robots. Just the antics of four girls, two 12 year olds, two 11 year olds, somewhat cuter acting and more childlike than perhaps is entirely realistic. This notwithstanding, for raw cuteness with added snark, the anime, and the manga, should be recommended.

Originally a Shonen manga series by Barasui, created in 2001, later adapted in 2005 to a video game, and an anime series in 2005. An OAV adaptation was released in early 2007 and another one, entitled Encore in early 2009.

Tropes used in Ichigo Mashimaro include: