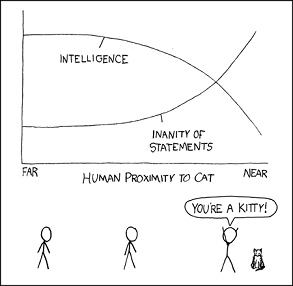 Yes you are! And you're sitting there! Hi, kitty!

You have a character who's a normal, perfectly sensible, maybe even slightly uptight person. Then they are presented with a puppy/kitten/baby/whatever, and they suddenly turn into a tower of jelly, going "Whosa cutie? Whosa cutie? You are, you are, yes you are. Da cute widdle thing you are, you... (devolves into gibberish)".

Dignity goes flying out the window. Often strikes The Comically Serious, helping to make them seem Not So Above It All. Also a good way to show that a Badass character is a big softie at heart.

Sometimes, Cuteness Proximity leads to a desire to take the subject of cuteness home and call him "George"... Well, maybe not George... If someone tries to take advantage of this to get a date, the trope's called Animal Chick Magnet.

Definitely Truth in Television. See also Cute Kitten and Precious Puppy. When the animal is far more dangerous than cute, but gets someone squeeing anyway, that person may be a Fluffy Tamer. Compare Delicious Distraction. See Distracted by the Sexy for the sexy, human variant.

Examples of Cuteness Proximity include:

Retrieved from "https://allthetropes.org/w/index.php?title=Cuteness_Proximity&oldid=1925001"
Categories:
Cookies help us deliver our services. By using our services, you agree to our use of cookies.