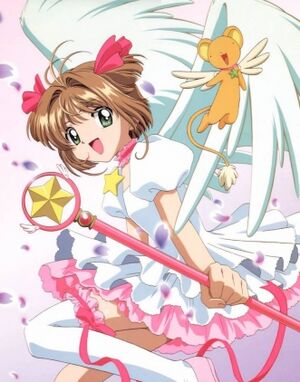 Known as mahou shoujo (魔法少女, "magical girl") in Japanese, or simply majokko (魔女子, "witch girl"), Magical Girls are empowered by various means with fantastic powers that both assist and complicate their lives, but manage to persevere despite this.

Magical Girls have high crossover popularity in different demographics with some minor but appropriate design modifications, and make up a sizable portion of both Shojo and bishoujo fandom.

Magical Girl Warriors arguably have the widest demographic appeal, and in the West are often synonymous with the idea of a Magical Girl.

History of the Genre

It may come as a surprise to learn that the entire Magical Girl genre is descended, effectively, from the American live-action series Bewitched. While two series claim the role of first magical girl anime—Mitsuteru Yokoyama's Mahotsukai Sally (Sally the Witch, 1966-1968) and Akatsuka Fujio's Himitsu no Akko-chan (broadcast 1969, but its manga predates Mahotsukai Sally) -- the creators of both credit Bewitched as a primary inspiration for their work. Yokoyama explicitly adapted its concept for a younger audience, while Akatsuka merely says he was "inspired" by it.

Originally, all Magical Girl shows were produced by Toei Animation, so "Magical Girl" wasn't so much a genre as a Media Franchise. This lasted until Ashi Production's Magical Princess Minky Momo hit the airwaves in 1982 (also notable for being the first such show to feature talking animal sidekicks), followed by Studio Pierrot's Creamy Mami in 1983 (the first Magic Idol Singer show). A one-shot OVA produced in 1987 featured a Bat Family Crossover between Studio Pierrot's four 80s Magical Girl shows (Creamy Mami; Persia the Magic Fairy; Magical Star Magical Emi and Magical Idol Pastel Yumi) - this was the first instance of a magical girl team.

The Magical Girl Warrior subgenre, despite being the most well-known style of Magical Girl show in the west, didn't hit until Sailor Moon in 1992 (unless you count Cutey Honey, which wasn't aimed at girls but had a lot of influence on it, or Devil Hunter Yohko, which wasn't aimed at girls either). This was a essentially a combination of the earlier style shows with the Superhero genre, particularly the Super Sentai formula. Sailor Moon was a huge hit, and naturally other shows were made in the same style, and some were even more divergent from the old-style shows. Many fans felt that shows such as Magic Knight Rayearth were still Magical Girl shows, despite all the dissimilarities from the previous generation (others disagree, and feel that Rayearth is Shoujo RPG World Fantasy instead).

The wave of shows made in Sailor Moon's wake eventually subsided, but the genre is far from dead. Contemporary examples include Ojamajo Doremi, Pretty Cure (aimed at both young girls and adult males), and Magical Girl Lyrical Nanoha (more of an action series with magical girls). In 2011 Puella Magi Madoka Magica was released, considered by many to be the genre's Neon Genesis Evangelion.

IMPORTANT NOTE: A girl who can use magic is not necessarily a Magical Girl in the sense of the trope or genre. A Magical Girlfriend, for example, usually does not fit into the same structure that defines a Magical Girl series.

Examples of Magical Girl include:

"Magical girls come in countless varieties; saccharine heroines, servants of darkness, hired killers, idol singers, vigilantes and more. They can save the world or bring it damnation. The choice is yours. Strap in, have your henshin wand handy, and get ready for a bumpy ride."

Magical Girl trope referred to in other works

Retrieved from "https://allthetropes.org/w/index.php?title=Magical_Girl&oldid=1837834"
Categories:
Cookies help us deliver our services. By using our services, you agree to our use of cookies.