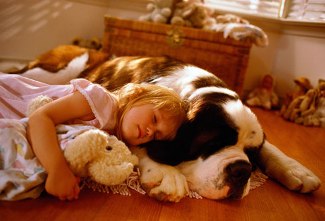 The opposite of the Angry Guard Dog, this canine Gentle Giant is big, friendly and somewhat dim-witted, will only kill you by licking you to death, and is likely to knock you over because he's just so happy to see you. Slobber included free of charge. And Truth in Television, of course.

Sometimes the "big" part can be taken to ridiculous extremes (see the mention of Clifford, below) or have the dog be big enough to ride on. In Real Life, large dogs tend to have shorter life spans than their smaller counterparts, but this is mostly glossed over in fiction.

A Sub-Trope of Canis Major.

Examples of Big Friendly Dog include:

Retrieved from "https://allthetropes.org/w/index.php?title=Big_Friendly_Dog&oldid=1772912"
Categories:
Cookies help us deliver our services. By using our services, you agree to our use of cookies.