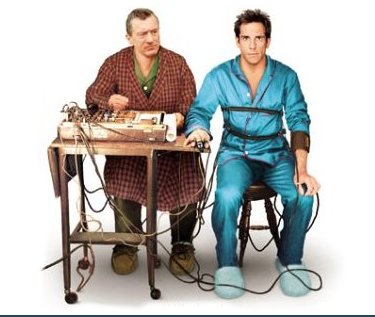 And you think your in-laws are embarrassing...

The typical Hollywood Lie Detector is not like a polygraph. It is instead equipped with red/green lights or a loud buzzing/dinging to indicate truthfulness, which it decides accurately and instantly. The victim is usually betrayed by the machine to comic effect.

While Perp Sweating an especially naive criminal, the cops may employ a fake lie detector, often a photocopier with an ominous paint job. The device really is a photocopier, secretly loaded with pages that have been preprinted with the words "TRUE" and "FALSE". The cops use the machine's answers (sometimes along with a warning that this is a new and experimental model of lie detector that could cause cancer or erectile dysfunction) to exasperate the perp into a confession. (Note: some people claim this has happened in real life, but Snopes has its doubts.)

It should be noted that polygraph results are not necessarily reliable on their own; it requires more than just a few wires hooked up and asking a couple of questions. It involves a certain type of room, seating arrangement, several minutes of general questions to establish a baseline, a skilled professional to interpret the results and a specific situation where the target has a "reward or punishment" attached to the results. Even then, the accuracy is at "a level slightly greater than chance, yet short of perfection".

For almost all cases, real life polygraphs are simply "Unreliable, Unscientific and Biased", according to the National Academy of Sciences, their findings not being admissible in court. So, this is an Inversion of Truth in Television.

Professionals also argue that the term 'lie detector' is misleading altogether because the actual purpose of the polygraph is to register certain involuntary reactions of the human body, not to interpret them. In other words, interviewer may only note that a particular question causes some unusual reaction but cannot really answer why it is so (e.g. the question 'did you drown the victim' may cause reaction because the suspect really drowned the victim or because he witnessed drowning of a friend and is still haunted by the experience). In real life, polygraphs usually help to narrow the range of possible leads to ones that appear most certain and require complex set of precise questions although you almost never see it in fiction.

Despite their proven unreliability, they are still given great weight by both the media and various governments.

Interesting note: The polygraph was invented by William Moulton Marston, who also created the character of Wonder Woman... who happens to wield a magic lasso that forces people to tell her the truth!

Compare with Living Lie Detector, when someone can discern falsehood as a superpower.

Examples of Lie Detector include:

Retrieved from "https://allthetropes.org/w/index.php?title=Lie_Detector&oldid=1844832"
Categories:
Cookies help us deliver our services. By using our services, you agree to our use of cookies.