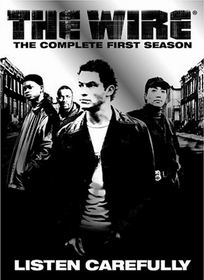 Baltimore is back, baby. If you feel the need to make stories that blow past the boundaries of detective/crime drama, you need to be working a Baltimore setting. Homicide: Life on the Street set the bar. The Wire doesn't just jump that bar, it executes a triple somersault and lands perfectly on the other side.

The Wire is a show about Baltimore, taking you through a different segment of the city in each season.

Season One is focused on the police and the drug trade. One of the unique aspects of the show is that, rather than having a crime each week, each episode is just a chapter in a single, season-long case for the Baltimore police Major Crimes Unit. Thus, the viewer sees in great detail the political wrangling on either side of the drug war, as financial constraints, personal vendettas and career opportunism get in the way of the guys just trying to do their jobs - whether those jobs are maintaining law and order or keeping up a steady supply of heroin to Baltimore's numerous "fiends".

The show's scope broadens from the street corners to show how all parts of Baltimore -- and by extension every US city -- are complicit in the social machine that keeps the drug trade alive and buoyant.

Season Two moves to the ailing Baltimore docks and their uneasy racial balance of power, as dock manager Frank Sobotka discovers the price for taking money from organized crime -- even if he's only doing it to keep the docks from dying.

Season Three returns to the streets of Baltimore, but also looks at the city's politicians, in particular up-and-coming mayoral hopeful Tommy Carcetti as he plays all sides to get into a position of power. Thus, the season is able to show how street-level policing is dependent on the whims of those higher up the food chain and examine the issue of reform.

Season Four is about education and continues to show Carcetti's rise as he runs for mayor, but a large chunk of the air time now also focuses on four young friends: Dukie, an impoverished son of junkies; Michael, a troubled victim of abuse who looks out for his younger brother; Namond, born into a junk-dealing family; and Randy, a small-time huckster just trying to get by. These four youths find themselves equally attracted and repelled by the opportunities and dangers of Baltimore's drug trade.

The fifth and final season wraps up the stories of everyone that has been featured in the show thus far, while introducing a new set of characters, a series of reporters working for The Baltimore Sun, a newspaper that is constantly suffering cutbacks and buy-outs as the experienced old guard are replaced with naïve new reporters. Two such reporters subsequently become involved in a scam by one of the MCU's detectives to bring down new drug kingpin Marlo Stanfield.

With the rotating focus every season, the show is anchored by the police officer characters and the often ignored power struggles that go on within major city police department. The rank and file detectives and patrol officers are often portrayed as helpless pawns of their superiors, who are more concerned with their own petty vendettas and personal ambitions than the city and its citizens. Detectives regularly find their investigations spiked the moment they start to become a financial burden for the department or threaten the status quo.

Counterbalancing the police are the city's drug dealers, who range from the the ruthless Marlo Stanfield and Avon Barksdale, to the more affable "Proposition Joe" and ambitious social climber Stringer Bell. Also in the mix is Omar Little, a deadly Robin Hood-like figure who robs drug dealers, the drug-addicted police informant "Bubbles", and the mysterious European crime lord known as "The Greek", who supplies both drugs and prostitutes to the city of Baltimore.

The Wire is rife with social commentary and the liberal political views of show creators Simon and Norris. The most overt theme of the series is the notion that the "War on Drugs" is a complete and total failure in its current form of "lock up the drug dealers and throw away the key" logic. In addition, there is the more nihilistic notion that the institutions that make up the American way of life are irreversibly corrupt, and that it is impossible to reform them. To try to reform them is to be crushed by the system.

Although the series has been critically acclaimed, The Wire never managed to earn anything more than a small but devoted following. Part of the reason, says co-creator David Simon, is that it has a primarily black cast representing the racial makeup of the real-life Baltimore. Indeed, the show's best-rated season is its second, which was the only one to have an equal number of white faces, being set in Baltimore's docks.

Tropes used in The Wire include:

It's all in the game.

Retrieved from "https://allthetropes.org/w/index.php?title=The_Wire&oldid=1831931"
Categories:
Cookies help us deliver our services. By using our services, you agree to our use of cookies.