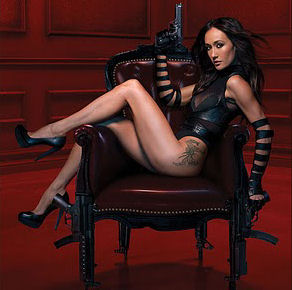 She's not just any assassin -- she's a rogue assassin. And she's the good guy.

"My name is Nikita. Six years ago I was taken out of prison and forced by a covert unit of the government to be an assassin. Three years ago I escaped, and have been hunted ever since. I was the first recruit to get out... I'm going to make certain I'm not the last."

A secretive United States government agency known as "Division" has for years been recruiting young adult convicts by faking their deaths and forcing them to train as spies and assassins. The recruits are brainwashed and threatened with a violent death should they fail in their assigned duties. Answering to no higher authority in the U.S. Government, Division has in recent years begun to go rogue, hiring out their particular services to the highest bidder.

Nikita was one of the best of Division's operatives, who became the first to ever successfully escape the program three years ago after the agency had her fiance killed. After spending the last three years planning her revenge, Nikita declares war against the agency by thwarting a crucial assassination. Unwilling to remain hidden in the shadows any longer, Nikita delivers a message directly to Division's director... she is going to bring the agency down, one mission at a time if she has to, and she vows to ensure that no one else will have their lives stolen in the way that Division took hers.

Nikita is an action-drama TV Series based on the 1990 French film of the same name. Premiering in 2010 on The CW Network, the series stars Maggie Q, and is produced by Warner Bros.

Not in continuity with the previous series, La Femme Nikita, on which it is also based.

The fourth season started in Fall 2013.

Percy: You don't kill someone just because they made a mistake.

Michael: By the way, Birkhoff is not working with us.

Amanda: Sometimes you have to sacrifice a pawn to motivate your knights.
Percy: Amazing how easily the chess metaphors come to mind when you're running Division, isn't it?

Alex: I knew there was something between those two. Michael's all "Nikita's like a cancer", that's personal baggage.
Amanda: (listening to Alex in her delirious state) I've always thought so.

Tasarov: The enemy of my enemy...
Nikita: Is just another man in my way.

"I am Alexandra Udinov, daughter of Nicholai Udinov. And this is your reward."

Birkhoff: "She pistol whipped me in the mouth. I don't see what's left to talk about here!"

Nikita: "You're a decorated soldier! Why are you doing this?"
Sean: "You're trying to kill my mother."
Nikita:: "Your mother (Sen. Madeline Pierce) is a bitch. I am not the threat, Sean. Open your eyes."

Nikita:: "I did this because I care."