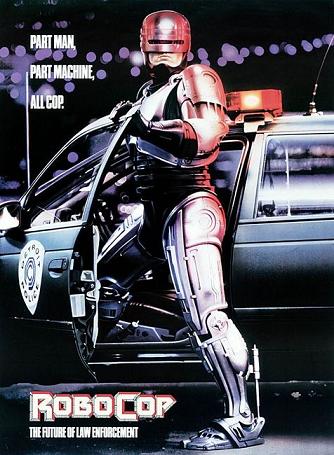 RoboCop (1987) is a Sci Fi/Cyberpunk film set Twenty Minutes Into the Future in a Crapsack World version of Detroit, where the police force has been privatized and handed over to Omni Consumer Products (OCP). Officer Alex Murphy (Peter Weller) is trailing a vicious criminal gang led by Clarence Boddicker when he is separated from his partner, Anne Lewis. Boddicker (Kurtwood Smith) and his cronies overwhelm Murphy, then take delight in unloading their shotguns into him.

After Murphy is pronounced dead, OCP takes his remains and effectively resurrects him as the Nigh Invulnerable cyborg police officer RoboCop. His mind is supposedly wiped, but signs indicate that the wipe job wasn't perfect. When Murphy does start looking for revenge against his killers, he discovers that top OCP executive Dick Jones is connected to Boddicker—and that Jones has meddled with Murphy's programming to ensure his own survival.

Directed by Paul Verhoeven, RoboCop is a gritty, ultra-violent, darkly humorous film which features a great deal of social commentary and political satire on such subjects as capitalism, privatization, the environment and public apathy. The film works as pure summer entertainment as well, with taut action sequences, impressive production design, and memorable characters. Its smash success spawned a whole series of sequels and spin-offs while providing a huge shot in the arm for the Superhero film genre that the embarrassing failure of Superman IV almost sunk in the same year.

The first sequel, RoboCop 2 (1990), was even more violent and edgier than the first, going so far as to include a child as one of the primary villains. The plot involves the spread of a new drug called NUKE, considered the most addictive narcotic in history, as the police department is on strike. RoboCop struggles to stem the flow by going after Cain, a drug kingpin with a messiah complex.

Meanwhile, OCP has failed to replicate their success creating the first RoboCop. After several failed attempts, an unscrupulous executive in OCP hypothesizes that the mind of a criminal with a strong desire for power and immortality could survive the procedure. When RoboCop finally takes Cain down, OCP immediately sticks Cain's brain in "RoboCop 2" and counts on his addiction to NUKE as a Restraining Bolt. (You get no points on guessing how long he stays loyal.) Now RoboCop must face his Evil Counterpart—who is far more heavily armed than himself.

Relying too heavily on raw violence and shock value while having less of the satirical humor that defined its predecessor, the sequel was not as popular as the original film. Frank Miller wrote the original screenplay; although the script was heavily altered to fit a movie format, his influence in the themes of the film can be identified, including scenes in which a focus group attempts to make RoboCop more family-friendly (rendering him unable to do his job). Miller later turned his original vision of the film into a comic book series (Frank Miller's RoboCop).

RoboCop 3 substituted the adult violence for something more tame, since the film was rated PG-13. The third film has OCP working to finish what they've been trying to do in the first two movies—tear down Detroit, a city they deem as "beyond saving", and rebuild it as Delta City. As usual, it comes down to Murphy vs. OCP. RoboCop (now played by Robert John Burke) finds himself working to keep OCP from forcibly removing citizens to make way for "a better Detroit", and along the way, he gets a jetpack and fights robot ninjas. Too mild in the action and edging into kiddie-film territory, this film bombed both financially and critically.

Despite the very adult material, the character of RoboCop has the general makings of a classic Super-Hero Origin story, and as such, the character has appeared in at least four different incarnations on TV. In all of them, to one degree or another, the ultraviolence and corporate/political satire is stripped away in favor of superheroics and corny humor:

And then, a Remake movie was released in 2014, which is a Continuity Reboot and serves to tell the the story of the eponymous cyborg cop in a new way and style. The work's page is here.

One more thing: there was also a series of videogames produced for home consoles and the arcade, mostly adhering to what is now referred to as the "run and gun" format.[1] In addition to the RoboCop-only games, there was also a crossover game with another famous film franchise: RoboCop versus The Terminator.

RoboCop appeared as a Guest Fighter in Mortal Kombat 11 with Peter Weller reprising his role.

The following tropes are common to many or all entries in the RoboCop franchise.
For tropes specific to individual installments, visit their respective work pages.

Retrieved from "https://allthetropes.org/w/index.php?title=RoboCop&oldid=1929283"
Categories:
Cookies help us deliver our services. By using our services, you agree to our use of cookies.