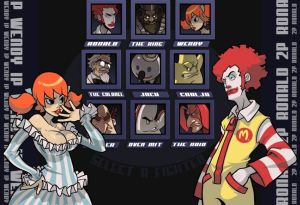 A particular form of Fighting Game.

The Mascot Fighter is rarely a series in and of itself, and is usually based off another game or anime series, or is a Massive Multiplayer Crossover.

Mascot Fighters are usually characterized by 2-D gameplay, even though the characters and graphics may be in 3-D. They are almost always four-player, and usually have multi-level playing fields. The action of a Mascot Fighter is usually fast-paced, and often chaotic. With four players, usually every man for himself, attacks can often come out of nowhere, so long Combos are usually discouraged, if even possible. Battles can be to the ahem "death", but more often than not, you can also win by knocking the enemy off the stage entirely. Items and Weapons that appear at random intervals and locations are also a big part of gameplay, and can often turn the tide of a battle. Ultimate Showdown of Ultimate Destiny will nearly always apply.

Note: Just because it's a crossover fighting game does not necessarily mean it's a Mascot Fighter. The distinction is in the gameplay (For an example, compare the mechanics of Smash Bros. to the Capcom Vs. series).

Examples of Mascot Fighter include:
Retrieved from "https://allthetropes.org/w/index.php?title=Mascot_Fighter&oldid=1951561"
Categories:
Cookies help us deliver our services. By using our services, you agree to our use of cookies.