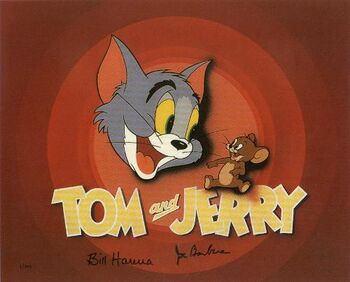 Their smiles in this picture do not reflect how they are in the cartoons.

Tom the cat and Jerry the mouse, the stars of a long-running series of short theatrical cartoons produced by MGM during The Golden Age of Animation, were the first characters created by William Hanna and Joseph Barbera. In the first short, "Puss Gets the Boot" (1940), the cat's name was Jasper and the mouse was not named in the short, but was originally dubbed Jinx by the animators. The characters acquired their present names in a contest at MGM (animator John Carr submitted the winning names) and went on to win seven Academy Awards.

John Carr may (or may not) have been inspired by the names of the two young tearaways in the 19th Century Life in London stories, or perhaps by the eggnog-like beverage known as "Tom and Jerry" (and itself named after the earlier characters).

After MGM's animation unit closed in 1957, Hanna and Barbera started their TV animation studio. No new Tom and Jerry cartoons were produced until MGM revived the series in the early 1960s, contracting it to Czechoslovakian-based Gene Deitch.

In 1965, CBS began broadcasting a Tom and Jerry Animated Anthology on Saturday mornings. This was two years after Chuck Jones began directing another series of theatrical Tom and Jerry shorts, taking over from Deitch and bringing production of the series back to Hollywood.

In 1975-77, Hanna-Barbera produced a less violent Tom and Jerry Animated Anthology series for ABC-TV, supported by a new character, the Great Grape Ape. This was followed in the early 1980s by Filmation's version on CBS, which used the classic Slapstick formula. Another series, Tom and Jerry Kids, ran on the Fox network from 1990 to 1993. From 2006 to 2008, the CW network's animation block included Tom and Jerry Tales, which continued with the slapstick humor of the theatrical shorts, as did a series of direct-to-video films. Unfortunately, Tom and Jerry Tales was canceled after 4KidsTV took over Kids WB, but the movies have continued.

The original shorts featured Mammy Two Shoes, a black maid who would be very politically incorrect by today's standards. At the same time that cartoons started to be edited to take the edge off the violence, they also replaced Mammy with Irish-tinged housewife "Mrs. Two Shoes". Apparently, its perfectly okay to make fun of the Irish. Mammy was phased out during the original Hanna-Barbera shorts era in favor of having Tom owned by George and Joan, an inoffensive (and bland) white couple. During the Gene Deitch period, Tom was occasionally depicted as being owned by a fat guy that looks suspiciously like "Clint Clobber" (a character Deitch created for Terry Toons), who was actually more violently sadistic towards him than Jerry ever was. (Few people remember this because few people like the cartoons from this period)

Thanks in large part to the lack of dialogue, Tom and Jerry has been very popular internationally. In fact, when Japanese television network TV Asahi ran a nationwide survey on the 100 most popular animated TV series in the country, it was the only non-Japanese series to make it onto the list. Ditto for the web poll conducted afterwards.

As of October 2011, Warner Bros. has started to re-release the classic Tom and Jerry theatrical shorts in a new DVD and Blu-Ray series called the Tom and Jerry Golden Collection, featuring fully-restored and strictly uncut and uncensored shorts. The previously legally unavailable "Mouse Cleaning" and "Casanova Cat" will more than likely be included on Volume 2.

Oh, and don't confuse them with that other Tom And Jerry. It'll save you a lot of trouble. Or for the name used by a very young Simon and Garfunkel in their earliest recordings.

Notable Shorts In This Series Include:

Tropes used in Tom and Jerry include:
Retrieved from "https://allthetropes.org/w/index.php?title=Tom_and_Jerry&oldid=1928131"
Categories:
Cookies help us deliver our services. By using our services, you agree to our use of cookies.