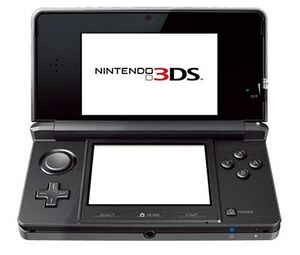 "Take a look inside"

Continuing down the path of technical innovation Nintendo first explored with the DS and the Wii, the Nintendo 3DS is a functional 3D handheld console. In many ways, the 3DS builds upon the base formula of its predecessors and improves them. Keeping all the features on the D Si, the 3DS takes the concept of the DS as a whole and adds another dimension to it.

Certainly, the most impressive addition to the handheld is the all-new widescreen top screen that enables 3D view without the use of special glasses. It does this by using a parallax barrier. 3D depth can be adjusted or disabled with a slider on the top screen. This now has relegated the two screens for, more or less, unique functions. The top screen serves as a main screen to show off the 3D capabilities, while the bottom screen is used for additional user input via touchscreen. The graphics are comparable to the Wii.

Control wise, the 3DS adds a motion sensor similar to that found on the Wii. This is predominantly used in games with a first person view to look around. An analog Circle Pad similar to that found on the PSP has been added as well. Other features include two outer cameras can take 3D pictures and a normal camera facing front. The 3DS comes with Augmented Reality capabilities for certain games and features. Wi-Fi has been upgraded to include WPA2, as well as WPA and WEP, which are compatible with DS games that support them.[1] The Wi-Fi can also receive messages and notifications online while asleep, similar to the Wii. The Friend Code system remains, but is now universal rather than per game.

A list of third party developers who will developing games for the new platform was revealed at E3 2010, including big names such as Activision, Atlus, Capcom, Electronic Arts, Konami, Namco Bandai, Square Enix and Sega. Its online store, the Nintendo eShop, contains existing DSiWare games (with a few exceptions) and DSiWare games released after the 3DS are made available on the eShop as well as well as Virtual Console games, new 3D games, and 3D-enhanced versions of old games are available. Promised in the near future is a lot of 3D video content: Music videos, movie and video game trailers and eventually full 3D movies. The system can also run Netflix. The 3DS has about 3–5 hours of battery life for a 3DS game in 3D mode, and 5–8 hours for a DS game or a 3DS game in 2D mode with Wi-Fi turned on and power-saving mode turned off. Following in the precedent set by the D Si, the 3DS is region-locked for (most) D Si and 3DS games, severely impacting the viability of playing imports.[2]

It launched with a fairly hefty price tag for a portable console--$250 in the United States, ￥25,000 in Japan, about £220 in the UK, and similar prices elsewhere. No previous iteration of the DS had launched for more than $200, and the Wii launched at the same price. The system generally did not sell out at release in most locations. However, Nintendo stated this was due to their learning from the Wii shortage and having produced a higher supply to satisfy initial demand. The first several months of the console's lifespan did not meet expectations sales-wise, widely attributed to the steep asking price and the poor launch line-up.

A price drop occurred worldwide on August 12, cutting about a third off the launch price; the US price dropped from $250 to $170, for example. Early adopters who had bought the system before this were given access to the 3DS Ambassador Programme, an initiative which allows free early access to 10 NES titles that Nintendo plans to make available for other 3DS owners as well as an additional 10 exclusive GBA titles that Nintendo currently does not plan to make available for other 3DS owners. Sales began to increase significantly after this, and by the end of November 2011 total hardware sales in the US had surpassed that of the original DS's first-year sales.

In September 2011, Nintendo announced the Circle Pad Pro (Slider Pad in Japan), an accessory which adds another slider pad (plus LZ and RZ, 2 additional shoulder triggers) to the device when attached. It launched in Japan in December 2011 along with Monster Hunter Tri G, the first title to officially support the accessory. It would later become available in the West in February 2012, aligning roughly with the launch of the second compatible title, Resident Evil: Revelations.

After a very costly loss caused partly by the initially low console sales, Nintendo announced, starting November 2011, a series of software and service revisions that would be introduced over the following months. This began with small Friend List update initially made available with all copies of Super Mario 3D Land, which would later be integrated into a large firmware patch which went live mid-December 2011, introducing new features such as 3D video recording/playback and automatic SpotPass software downloads. Also announced was a revamping of the eShop, which so far has introduced DLC and demo support, and will later add browser and mobile-based access to the eShop. Starting with New Super Mario Bros. 2, the eShop will also offer retail games for download. The current services will eventually be integrated fully into the Nintendo Network, expanding further to encompass features such as the Miiverse of the Wii U, allowing for cross-platform messaging.

Has given the fans many reasons to rejoice already, with more on the way.

Its market competitor is the Play Station Vita.

Retrieved from "https://allthetropes.org/w/index.php?title=Nintendo_3DS&oldid=1951566"
Categories:
Cookies help us deliver our services. By using our services, you agree to our use of cookies.