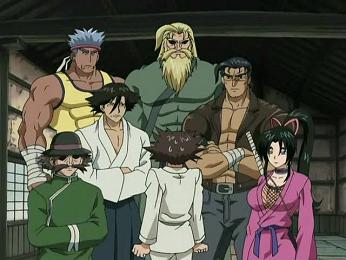 These six masters will pound everything they know into Kenichi. Literally.

A retool of Tatakae! Ryouzanpaku Shijou Saikyou no Deshi or Ryozanpaku History's Strongest Disciple released as a monthly series back in 2000.

Kenichi Shirahama is a wimp. Even the geeks pick on him. That all changes when he meets Miu Fūrinji after entering high school. Miu, eager to make friends, gladly helps Kenichi with his desire to become stronger. She introduces him to Ryōzanpaku, a dojo which houses some of the most powerful martial artists known to man. Though Kenichi only sought guidance to stop being bullied, his rapidly growing prowess attracts the attention of bigger and badder foes that he has to fight... if he doesn't get pummeled through the floor tiles during training first.

Written by Syun Matsuena, Shijō Saikyō no Deshi Ken'ichi (a.k.a History's Strongest Disciple Kenichi) follows Kenichi's adventures as the Sorting Algorithm of Evil puts him up against more and more dangerous opponents. It has all the elements of Shonen action stories with a healthy dose of satire on the whole thing. The manga spans at 46 volumes and counting. The anime consists of 50 episodes and is dubbed by FUNimation under the title Kenichi: The Mightiest Disciple, premiering on their channel on October 2009. Kenichi, Miu and friends appear in the Massive Multiplayer Crossover game, Sunday VS Magazine Shuuketsu Choujou Daikessen.

In 2012 a series of OVAs began, starting from where the anime ended with Ragnarok Arc closure, introducing Yami and Yomi.

It is very awesome.

The Character Sheet can be found here.

The manga has two spin offs a 4-koma gag manga Tekuni to Shijou Saikyou no Nakamatachi/ Tekuni and Her Strongest Friends in History, and a manga focusing on other characters in the universe Shijou Saikyou no Gaiden/History's Strongest Another Stories.

Tropes used in Kenichi: The Mightiest Disciple include:
Retrieved from "https://allthetropes.org/w/index.php?title=Kenichi:_The_Mightiest_Disciple&oldid=1901845"
Categories:
Cookies help us deliver our services. By using our services, you agree to our use of cookies.