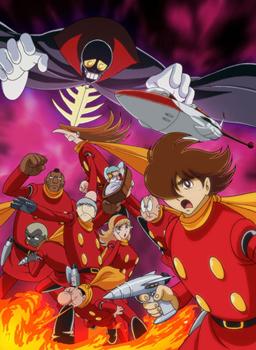 Originally a manga by Shotaro Ishinomori, Cyborg 009 has been adapted into three movies and three anime series.

The nine cyborgs are:

All but 5 episodes of the pretty good most recent series, were aired on the Cartoon Network a few years back.

The manga is available in English on comiXology.

A movie is in the works, to be directed by Kenji Kamiyama of Ghost in the Shell: Stand Alone Complex. Shotaro Ishinomori's later series, Himitsu Sentai Goranger and JAKQ Dengekitai uses elements of this series.

In recently years, Netflix has acquired the rights of the airing of Cyborg 009: Call of Justice, with a 3 part released in Japan. The films were later edited to 12 episode mini-series in 2017 for worldwide release.

Tropes used in Cyborg 009 include:
Retrieved from "https://allthetropes.org/w/index.php?title=Cyborg_009&oldid=1955722"
Categories:
Cookies help us deliver our services. By using our services, you agree to our use of cookies.