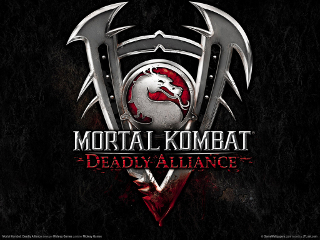 Mortal Kombat: Deadly Alliance is the fifth canonical installment in the Mortal Kombat franchise, released for Game Cube, Game Boy Advance, PlayStation 2 and Xbox in 2002. It picks up where Mortal Kombat 4 left off.

Scorpion's ending in Mortal Kombat 4 shows Quan Chi being imprisoned in the Netherrealm -- but he escapes this fate, and in the process, he discovers an ancient tomb with the mummified remains of Onaga the Dragon King, the first emperor of Outworld (and the dragon portrayed in the franchise's logo). Quan Chi figures out how to resurrect Onaga's dark army -- the souls of various warriors must be implanted into the army's dead bodies -- and he strikes a deal with Shang Tsung to gain immortality in exchange for Tsung's help. The deadly alliance has two major problems in its path -- Shao Kahn and Liu Kang -- but they are taken care of in short order: Kahn is killed while the duo swears a false allegiance to him, and Liu Kang is killed when Tsung disguises himself as Kung Lao and approaches a none-the-wiser Kang. After consuming their souls, Tsung and Quan Chi return to Outworld and begin their plans to resurrect Onaga and his fallen army -- which is when Raiden gathers together Earthrealm's strongest warriors to stop them.

Although still suffering from Polygon Ceiling problems, Deadly Alliance was praised as the Mortal Kombat game which resurrected the franchise as a whole after the failures of Mortal Kombat Gold and Mortal Kombat Special Forces. It was the first game to include a Stance System -- which allowed fighters to switch between two separate fighting stances and a weapon-based stance -- and it also dropped the Running/the Run meter.

Two versions of this game were released for the Game Boy Advance. The first, which is named the same as this game, features Shang Tsung, Quan Chi, and Scorpion being included in both versions. Deadly Alliance has Frost, Jax, Sub-Zero, Kano, Kung Lao, Kenshi, Kitana, Li Mei and Sonya. The second, Mortal Kombat: Tournament Edition, featured Bo'Rai Cho, Cyrax, Drahmin, Hsu Hao, Johnny Cage, Mavado, Nitara, Raiden and Reptile, plus the exclusive characters Sektor, Noob Saibot and Sareena (making Tournament Edition the only Mortal Kombat game aside from Special Forces to not feature Sub-Zero as a playable character).

Tropes used in Mortal Kombat: Deadly Alliance include:
Retrieved from "https://allthetropes.org/w/index.php?title=Mortal_Kombat:_Deadly_Alliance&oldid=1796194"
Categories:
Cookies help us deliver our services. By using our services, you agree to our use of cookies.