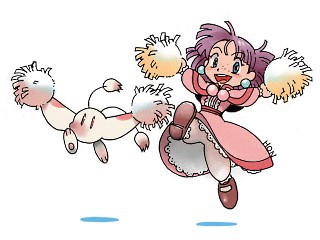 Status Buffs are often done by lifting other players' spirits through song or... cheering.

An ability that gives a temporary boost of one form or another to a character or an ally. Often called just a "buff". Can be a cast spell, a technological ability, or can be packaged as a single-use item like a potion or drug.

The defining characteristic is that the buff must be temporary. Some must target a specific character for the effect, but more recently "auras", or area-effect constant buffs, have become popular. These apply to all allies inside a range of the caster, with a possible maximum number of total affected. This reduces micromanagement of buffing, but auras most often have a lesser effect than a straight buff spell.

These boosts can overlap with the concept of the Power-Up, in that both make your character stronger. Having said that, Power Ups are more likely to be found in single-player games, and are always stumbled upon in the game-world instead of being bestowed upon you by a third party. Similarly, a Field Power Effect is usually due to external and non-human forces affecting the strength of a set of characters.

Some spell-casting character classes specialize in these enhancements, and they become everyone's friend very quickly when playing in a multiplayer environment, especially when they double as a healer. By the same token, these classes often have trouble looking out for themselves. The characters that specialize in buffs and healing/repairs are often called "support classes", although this classifier is really a superset encompassing any non-combat roles on a team.

Watch out for enemies that can cast a Status Buff Dispel.

Examples of Status Buff include:
Retrieved from "https://allthetropes.org/w/index.php?title=Status_Buff&oldid=1899035"
Categories:
Cookies help us deliver our services. By using our services, you agree to our use of cookies.