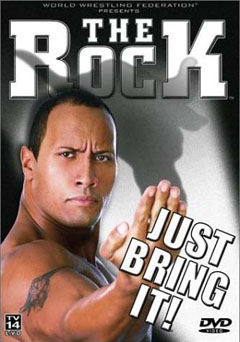 All right! Bring it on!
—Vulture pilot, StarCraft

While enemies or rivals usually provoke the protagonist into foolishly attacking them so that they can get the advantage, there can be times when the protagonist may have sudden confidence that he will win the fight and will taunt the enemy with something like "Come on! Bring it to me!" before unleashing their most powerful attack on their victim.

A Bring It taunt can also come in the form of body gestures, such as finger waggling, moving a finger or the whole hand towards themselves ("Come get me" for example {and sometimes done using both hands}) to provoke anger, turning their backs towards the enemy and slapping their butt (usually accompanied by "Nyah nyah nyah-nyah boo-boo!"), etc. While villains may also fall under this trope, it's usually the heroes who will challenge the enemy with this trope.

Not to be confused with the Bring It On film series, which is totally different from what this is.

Examples of Bring It include:

Judai: Dude, it is totally brunged.
and
Kaiser: Consider it brought!

Thug who was cool and collected seconds before: He's the devil!

Mutant Leader: Batman! Face me, fool! I kill you! I eat your heart! I show you who rules Gotham City!
Batman: Okay, boy...Show me.

Religion of Crime Acolyte: I will give the High Madame your still-beating heart!
Batwoman: Bring it. (Kicks her ass) Yeah, that's what I thought.

Han: Bring 'em on! I prefer a straight fight to all this sneakin' around.

Yoda: If so powerful you are, why leave?

Nazgûl: Give up the Halfling, she-elf.
Arwen: (draws sword) If you want him...come and claim him!

Charley: Where's Amy?
Jerry: Up here. All you have to do is get by me. [Makes beckoning gesture with his index finger]

I am Jedi Thul. I have not fought for real in many years. I should be a pushover. Come get me.

All you wounded, those of you who can
Pick yourselves off the ground, hurry back
Tell your leader YOU'LL NEED MORE MEN!

Minmax: Bring it on!
Forgath: No! Don't bring it on! Bring nothing on!

Jack: WHO ELSE WANTS SOME!?

"It appears you and I are destined to battle aboard this ship once more, Autobot.
"Bring it on, Decepticon."

Superman: Who else wants a piece?!

"There are some who, uh, feel like that, you know, the conditions are such that they can attack us there. My answer is: bring 'em on."

"This is the reform that some folks in Washington are still hollering about. And now that it's passed, they're already promising to repeal it...Well, my attitude is, go for it."

Come and have a go if you think you're hard enough.