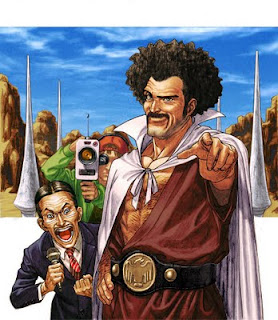 Everyone can blow up mountains. But it takes a Badass Normal to keep the press at bay.

A character touted as a brave and mighty warrior, despite it being complete hogwash. The best this character can manage is to be the Unknown Rival, although the viewers are totally aware it's no contest, and oftentimes, he has Feet of Clay.

Sometimes this character is just duplicitous, but is allowed to claim the title to keep the Masquerade going for the greater good. Sometimes, he's simply in the right place at the right time. Sometimes, rumor ran away with scraps of information, and his efforts to correct it lead only to a reputation for modesty.

Occasionally, this sort of character is close friends with a Humble Hero who is far more deserving of the Fake Ultimate Hero's fame and glory.

The Messiah, of course, has no problem with them taking the credit, though the Naive Newcomer may be shocked to find him not everything the legend says he is.

The false attribution can occur on-stage, with the Fake Ultimate Hero getting credit for what has happened, generally over the actual character who did it, or off-stage, where the characters learn the truth (often the hard way) but the true heroes of those incidents are not characters.

The "false hero" who tries to claim the reward of the hero is a stock character of the Fairy Tale. After the Engagement Challenge, he shows up with the dragon's head or threatens the princess until she agrees to support his claim. A frequent problem for him is that while he has the heads, the hero cut their tongues out first. Others steal what he won on his quest. (Not all false heroes are the Fake Ultimate Hero, though, such as Cinderella's stepsisters.)

A recently popular variant seems to be to have this individual as a semi-sympathetic protagonist who will usually acknowledge himself that he's not all he's made out to be. Sometimes, however, their actions will make you wonder if they're just putting themselves down a little too much... And sometimes they'll even end up becoming a Real Ultimate Hero, though not always in the conventional way.

Compare Glory Hound, Accidental Hero. Not to be confused with Decoy Protagonist. Miles Gloriosus is when this guy has absolutely nothing to back his stories up. Hero Syndrome is when someone tries to be this guy by causing the disasters in the first place. Subtrope of Paper Tiger.

May overlap with Nominal Hero if the character's intentions aren't heroic either.

Examples of Fake Ultimate Hero include: