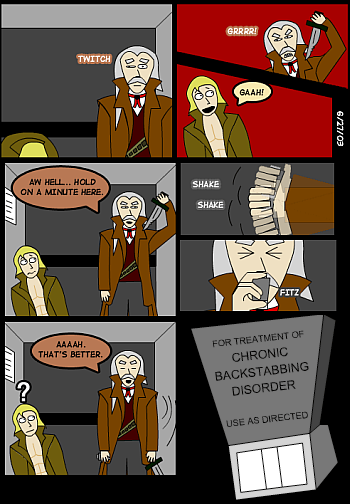 In fiction, it is common for characters on either the heroic or villainous side to betray their superiors or comrades. Chronic Backstabbing Disorder is when a specific character constantly and successfully betrays his apparent allegiances, only to move on to a new group and repeat the pattern. The character may be doing it for a higher purpose (making them The Chessmaster) or their own selfish betterment (making them a Wild Card), or they could just be Ax Crazy. Different from the Heel Face Revolving Door in that it's not always a hero/villain swap, and in fact is usually switching between different groups of antagonists.

Named for Revolver Ocelot's "condition" in The Last Days of Foxhound, which is his proclivity for this deliberately Flanderized into a physical compulsion for comedy value.

Frequently happens when a Magnificent Bastard plays the Enigmatic Minion. See Reliable Traitor for a possible reason why the character can continue to find work. Related to The Starscream, except that that character type doesn't succeed (most of the time, anyways... and when they do, they usually don't get to revel in it for long.) These characters are also commonly Chaotic Neutral, Chaotic Evil, Chaotic Stupid, Stupid Evil, or Stupid Neutral. (Lawful and/or Good characters tend to see betrayal as a big no-no, and Neutral Evil characters (probably) won't betray their current allies just for the hell of it.)

As a Betrayal Trope this is probably going to be Spoilicious.

Examples of Chronic Backstabbing Disorder include:

He also betrayed his original crew in order to join Serenity. Why? Well, they were robbing Serenity, and Jayne's share was 7%. Mal offered him 11% and his own bunk. Several shots to the back later, Jayne was Serenity's newest crewmember.

In The Movie, Jayne tries to go behind everyone's back and throw River off the ship once he realizes how much a threat she represents. River advises Jayne of his fallacious reasoning via ceiling-launched cranial trauma.

Retrieved from "https://allthetropes.org/w/index.php?title=Chronic_Backstabbing_Disorder&oldid=1927586"
Categories:
Cookies help us deliver our services. By using our services, you agree to our use of cookies.