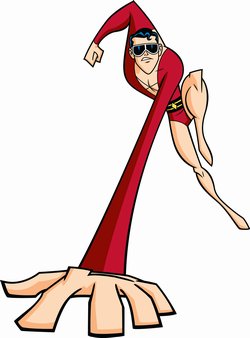 The guy can't stay in one form for long.

Plastic Man is a DC Comics superhero, created by renowned cartoonist Jack Cole. He is best known as "the stretching member of the Justice League" though none of this is completely accurate.

For starters, Plastic Man (or "Plas" for short) was created by another company, Quality Comics, in 1941. He was the star character of Police Comics #1-102 (August, 1941-October, 1950). And also gained his own title, Plastic Man which lasted for 52 issues (1943 to February, 1955). While among the longest running characters of The Golden Age of Comic Books, Plas was then pretty much forgotten. Quality Comics ceased operations in 1956, selling most, if not all of its properties to DC Comics. The new owners continued a few of Quality's ongoing series, most notably Blackhawk. But had no interest in reviving defunct series. The character was next revived in Plastic Man vol. 2 #1 (December, 1966). Though the Plastic Man of this series was said to be a look-alike son of the original.

Second, long before Plastic Man joined the League, Elongated Man (who may have been a Captain Ersatz of Plas) had been a member for decades (though admittedly Plastic Man was always better known.) Plastic Man only joined the ranks of the League in JLA #16 (March, 1998).

In his origin story, Plastic Man was "Eel" O'Brian, a gangster. One night while robbing a chemical company, O'Brian was shot and fell into a vat of unknown chemicals; the rest of his gang abandoned him. He managed to escape and was taken in by a monastery, where he recovered. The betrayal by his own men and the kindness of the monks made him decide to change his life, and he started using his newfound shapeshifting powers (he can change into anything he can imagine, but always retaining the same colors) to battle crime as "Plastic Man". He kept his Secret Identity as O'Brian in order to infiltrate the underworld, but eventually joined the FBI.

As you can imagine, given the potential for zanyness of his powers, Plastic Man soon became more of a comedy series, especially after gaining a man named Woozy Winks as a Sidekick. Many of his villains were even sillier, being parodies of Dick Tracy criminals or having pun-based names.

A more somber version of Plas appeared in some issues of the (original) comic book series The Brave and the Bold in the 1970s; in this case Plastic Man was shown as having fallen in love with Ruby Rider, a rich but evil woman, and being miserable as a result.

Plas and Woozy starred in the anthology series Adventure Comics for a while in the early 1980s, with stories even sillier than before. It was around this time that an animated series also based on the character aired; instead of Woozy, however, a Hawaiian character named "Hula Hula" was his partner, and Plas was given a new love interest in a blonde woman named Penny, whom he married and later had a baby with the same powers.

Post-Crisis, they changed Plastic Man's origin to make him Darker and Edgier. Now he never was rehabilitated by monks, instead he tried to commit suicide because he considered himself no longer human, and Woozy was a mental patient. Hey, it was the Dork Age. Fortunately, later portrayals have been more positive: his first origin got restored, Plas is his cheerful self again, and he joined the Justice League where he proved his mettle.

Kyle Baker wrote and illustrated an unashamedly cartoony series from 2004 to 2006, which was much loved by critics and ignored by everyone else. Baker’s series returned to the origin of the Jack Cole stories and mocked the ultra-seriousness of modern superhero comics.

Bruce Timm has said that he wanted to use Plas in Justice League Unlimited, but couldn't due to just one of the many copyright issues that surrounded the show. He does get a few mentions in an episode called The Greatest Story Never Told.

He also starred in a pilot for a series on Cartoon Network. Made in 2006, it will finally get off the ground as a series of shorts for the network's DC Nation block. Much earlier, he had his own cartoon show called The Plastic Man Cartoon Comedy Hour by Ruby-Spear Production. It ran from 1979-1981 and featured live-action segments between animated shorts. These shorts included Plastic Man cartoons but also Marmaduke, Heathcliff, and others.

More recently, Plastic Man has been appearing often in the animated version of The Brave and the Bold. In this version, Plas was a member of Kite-Man's gang, and it was Batman who caused him to fall in the chemicals (by accident) and then took it upon himself to reform the former criminal (who is shown as still having a hard-to-resist compulsion to steal.) Woozy is back as his sidekick, and Plas has a new girlfriend, Ramona, a redhead with a "New York" accent and an abusive attitude. Oh, and they have a baby too. He has proven an Ensemble Darkhorse in a series full of them. He had appearances on Superfriends as well.

Evan Dorkin wrote and Stephan Destefano illustrated a Plastic Man feature to run in Wednesday Comics in case any of the other strips were unable to keep up with the deadline; while not making it into the serialized issues, the single page produced is included in the collected book.

Tropes used in Plastic Man include:
]
Retrieved from "https://allthetropes.org/w/index.php?title=Plastic_Man&oldid=1913946"
Categories:
Cookies help us deliver our services. By using our services, you agree to our use of cookies.